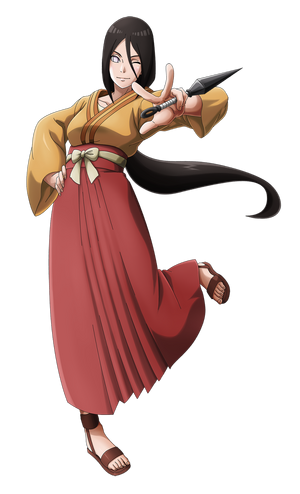 Hanabi Hyuuga (日向ハナビ, Hyūga Hanabi) is a kunoichi from Konohagakure and the heiress of the Hyuuga clan.

Tier: At least 8-B, possibly higher

Powers and Abilities: Superhuman Physical Characteristics, Chakra Manipulation, Skilled Hand-to-Hand Combatant, Acrobatics, Acupuncture, Forcefield Creation with Kaiten, Duplication (Can create illusionary clones without any substance), Shapeshifting (Can transform into animate and inanimate objects), Statistics Amplification (Can enhance her physical capabilities and speed with chakra), Limited Durability Negation (The Gentle Fist bypasses durability to an extent as it directly targets the nerves and life energy channels to disrupt the target's movements and ability to control their inner energy), Enhanced Senses (Byakugan allows her to see long distances and tiny objects, has an almost perfect 360° field of vision, can see through visual obstructions and her opponents' internal chakra systems), can replace herself with inanimate objects to avoid damage, Surface Scaling, likely Paralysis Inducement (via paralysis jutsu), Resistance to Illusion Creation

Attack Potency: At least City Block level (Easily defeated Boruto. As a Jonin she should be at least comparable to Kurenai and far above the likes of many Genin), possibly higher (A Jōnin has been power-scaling above this)

Intelligence: She is capable enough to be the leader of the Hyuuga clan and selected by her father, Hiashi said that she is more suitable than Hinata.

Weaknesses: Her fighting style is primarily limited to taijutsu, and there is a small blind spot near the back of her neck, which her vision cannot cover.

Byakugan (White Eye): This eye technique is the kekkei genkai of the Hyūga clan and one of the Three Great Dōjutsu. Wielders of this eye can see long distances (at least up to 10 kilometers) and can see objects that are too small for the normal eye to detect (such as the tenketsu points on a human's body). The Byakugan has an almost perfect 360-degree field of vision, though there is a small blind spot located near the back of the user's neck. The eye can also see through objects as well as many barriers and can see chakra.

Retrieved from "https://vsbattles.fandom.com/wiki/Hanabi_Hyuuga?oldid=6023156"
Community content is available under CC-BY-SA unless otherwise noted.