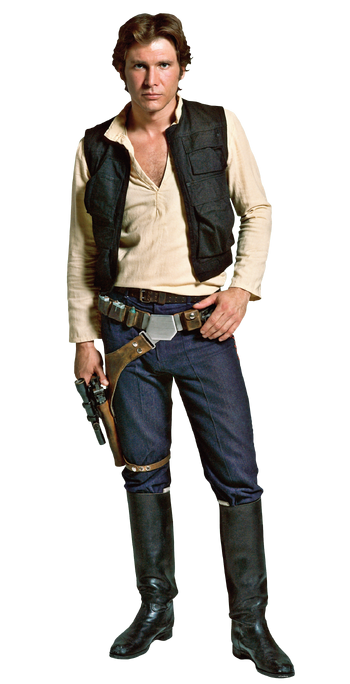 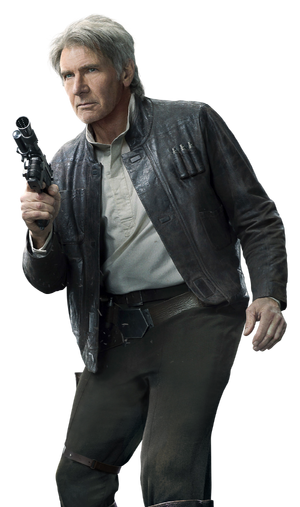 Han Solo was one of the many smugglers that worked during the Galactic Empire's reign over the galaxy.

He and his pal, Chewbacca, ended up getting involved with the Rebellion when they were hired by Luke and Obi-Wan to transport them to Alderaan. But it turned out that the planet was destroyed by The Death Star, and they ended up boarding the space station.

Tier: 9-C physically. 9-A with blasters. High 8-C with heavy weapons and explosives

Name: Han Solo (His real last name is unknown, Solo is a nickname he got)

Attack Potency: Street level physically (Should not be much weaker than most unenhanced Jedi. Capable of defeating stormtroopers with their armor equipped). Small Building level with blasters (Heavy blaster pistols such as Han's DL-44 and military issue blaster riflescan pack these kinds of a punch). Large Building level+ with heavy weapons and explosives

Durability: Street level (Survived a glancing blow from a Wookiee, withstood getting tackled through a metal pole by Chewbacca)

Standard Equipment: His modified DL-44 heavy blaster pistol. Will use blaster rifles, grenades or other weapons for missions/scenarios if the need arises.

Intelligence: Fairly high. Is a skilled con artist and has some decent tactical acumen. Is a skilled hand to hand combatant and skilled with all sorts of directed energy weapons.

Weaknesses: Can underestimate Force users. Cocky to a degree.