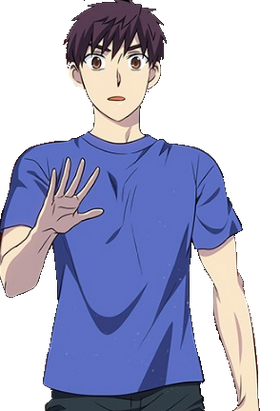 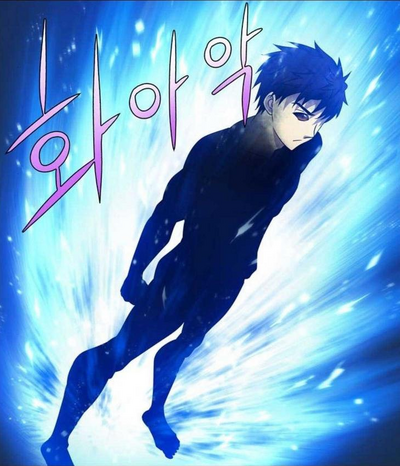 Han Jee-Han was an ordinary high school student who was addicted to Korean MMORPGs. One fateful day, he suddenly gained the ability to interact with the world around him as if it were one of his beloved video games. This quickly drags him into the Abyss, the supernatural underground world that lays the foundation for modern society as we know it. Jee-Han soon finds that he'd better start grinding if he wishes to survive this tumultuous environment, lest he be hunted down for his surprisingly valuable ability.

Superhuman Physical Characteristics, Minor Reality Warping and Power Modification with Game Mechanics, Power Bestowal via Party System, Accelerated Development (Achieved a level of mastery that should need decades in months, and the time difference between his first and last key is merely one year. Learned dual casting, the ability of splitting one's mind to cast two spells at a time, in an hour despite it normally taking years), Non-Physical Interaction (Can hit intangibles with mana and ki, be they elemental, non-corporeal, phasing or even made out of pure energy. Even things such as curses can be attacked and destroyed by him. Can destroy indeterminable enemies with certain weapons), Regeneration (Can heal as long as his HP doesn't hit 0. This mean that stabbing him in the pinkie with enough force could kill him, but crushing his heart might not. Can recover health and stamina completely in a few minutes), Martial Arts, Information Analysis via Observe, Statistics Amplification, Weapon Mastery, Reactive Evolution (Certain experiences lead him to developing skills like physical endurance and bloodlust sense), Pocket Reality Manipulation (Can create, enter, leave and destroy them), Energy Manipulation (Through most Magic), Healing via Yeon-Hon Principle, Life Manipulation via Life Drain, Homing Attack via Spinning Mana Arrows, Illusion Creation through Ogre's Boss, Enhanced Senses (His hearing and sight increased with his physical strength. He can channel Ki into his eyes to see better), Extrasensory Perception (Could feel negative emotions, bloodlust and can feel danger (In episode 39 he had a dream about the Modern Odds and Ends Golems and Lolikiano Mistream)), Earth Manipulation via Gnome, Electricity Manipulation via Lightning Arrows (Technically only electricity particles), Invisibility with Ogre's Invisible Hat, Time Stop, Curse Manipulation (Can remove a curse from someones body), Telekinesis, Explosion Manipulation via Exploding Flame, Resistance to Physical Damage (Via Physical Endurance), Mind Manipulation via Gamer's Mind (Includes several branches of it, from madness to emphatic manipulation), possibly Time Stop (Time Stop is a common ability that nearly anyone has, and yet it is impossible to use in battle. Shin was aware that Han was talking with Kwon in a time-stopped barrier and later casually references it despite having been within its range when it activated. Hwan and others were able to keep being conscious while The President used their Law Manipulation to stop everything, despite them claiming to control time as well) and Power Nullification (Gamer's Mind and Gamer's body are unaffected by several layers of Power Nullification that can nullify all of Han's abilities even in his third key)

All previous to a far higher extent, Protective Aura, Poison Manipulation via Equipment, Flight, Danmaku, Longevity (The stronger he is, the slower he ages), Mana Absorption, Resistance to Fire Manipulation with Hearth of Golem

All previous to a heightened extent, Improved Extrasensory Perception (Can feel when and pinpoint where someone uses magic) and Statistics Amplification (Can amplify his physical body by 500%, and his magic by 200%), Elemental Manipulation (Earth, Lightning, Fire, Water, Air, Light, Darkness and Explosion), Invisibility via Cloaking, Smoke Manipulation with magic fog cloud, Time Manipulation via Time Acceleration, Soul Creation, Holy Manipulation via Purifying Sunlight, Illusion Creation via Copy Phantoms, Blacksmithing and Alchemist knowledge, Power Nullification, Power Absorption with Skill Theft, Empathic Manipulation, Mind Manipulation, Limited Power Mimicry via Mirror's Protection, Pseudo-Intangibility via Black Flame Incarnation, Pressure Points, Resistance (To Statistics Reduction, Power Nullification (Unaffected by the Church of Masks' magic nullification), Magic (Has increased resistance to it), Transmutation (As an S rank sorcerer, he should be able to resist Berith's transmutating golems, which are rated A-) and Magic with Black Flame Incarnation)

All previous, massively better at Martial Arts (Has learned several martial arts, with each one being beyond what those with centuries of experience could learn.) and Enhanced Senses (Can sense things withing 20 kilometers radius, to the point that even in complete darkness he can almost perfectly "see"), Lie Detection, Spatial Manipulation, Necromancy, Power Fusionism, Ice Manipulation, Precognition with Tarot Cards, Sphere of Survival counters acids, toxins, heat and cold

All previous, Heightened Regeneration, Martial Arts and Resistance to Magic, Improved Accelerated Development (Can overcome bottlenecks and physical limits much easier) and Spatial Manipulation (Even in places protected against it, he can observe and twist space to create a portal to a random location outside of a pocket dimension or closed off space. Can "scatter" someone into smaller pieces that are unable to use their abilities, overcoming resistance with it too), Energy Manipulation and Limited Adaptation (Managed to control his mana once it became to much for his body to bear, and his body evolved and became stronger thanks to it), Duplication with Mirror Image spell, Multiple Personalities at will (Can divide his mind into multiple personalities to multitask better), Can eliminate the effects of frictional force, Chain Manipulation (As seen here), Likely Supernatural Luck (His luck stat is 100 when a normal persons 5~15, and 300 is Yeonghwan Cho), Paper Manipulation via Paper Glider, Mind Reading and Superior Information Analysis with Beginner God's Eye (Can analyse entire pocket realities, and space itself, to find possible weaknesses in it and know it's layout), Resistance Negation toward Information Analysis, Teleporting Forcefield via Shield of Twisted Space

Attack Potency: Building level (Spiraling Mana Bomb is 800% his normal attack, though it wasn't fully charged, so Han scaled to more than an eighth of it), Large Building level with Mana Spiraling Bomb and Cheon-Bu's Three Skills | City Block level physically (Weaker, but somewhat comparable to a Modern Odds and Ends Golem). at least City Block level, possibly Multi-City Block level with magic and martial art skills (Superior to the Modern Odds and Ends Golems.) | Small Town level+ (Created an artificial meteor. Stated to be superior to Lolikiano Mistream), likely Town level (Since stating to be superior to Lolikiano, he states to have gotten 250% stronger. Has a 200% amplification for his magic power.) | At least Large Town level (Comparable to the Dancer of the Storm), likely Large Town level+ (Should be comparable to Shin Sun-Il, completely vaporized a small town) | City level (Comparable in power to members and weapons of the Dan Ul guild such as the Destructive Orb. Plain states that his golems' power is comparable to the Tsar Bomba), likely Mountain level with statistics amplification (Can amplify his stats by over 400%), potentially Small Country level with Baal (Baal is the strongest demon, being superior to gods whose corpse at 0.01% power could create an explosion as wide as Korea, and mantaining a reality a 72th as large as earth through his own power. Upon using the power of the underworld, Baal becomes aware of Han's location and can manifest there. He is, however, unlikely to help unless Han gives him something of equivalent value by doing so)

Speed: Subsonic movement speed, likely Transonic combat speed (Could trail and follow as a bullet from a modern rifle neared him, and only took it to test his durability. Comparable to characters that can mover through several meters faster than he could see as a normal human.), SoL with Lightning Arrows | Subsonic flight speed, Supersonic combat speed (Became more than twice as fast as previously. Can double his speed with Ki), higher reaction speed, SoL via Lightning Arrows | Massively Hypersonic (A twentieth of his fully amplified speed and can use lightning attacks), Massively Hypersonic+ with Time Dilatation | Massively Hypersonic+, Relativistic+ with Time Dilatation (Stated to amplify his time by hundreds of times. Saw Follower of Darkness as completely still, to the point where he had a short discussion with Kwon with Follower having not visibly moved at all). SoL with Lightning Arrows and Laser of Destruction (Han used the laser after to get past a barrier after seeing that light passes through it, Seeker of Truth described it as concentrated light), FTL reactions with Fast Thinking (Amplifies his thinking speed by five times, and it has been stacked with time dilatation by both Han and Yoohwa) | Relativistic+ (Comparable to his previous amplified self, and should be able to react to light based attacks that are stated to move at light speed), Massively FTL via Time Acceleration, higher reactions with Fast Thinking

Stamina: Superhuman. Would have run out of mana in continued combat in 30 minutes, though he found that to be extremely fast, and this was when his level was in the single digits. Can restore his stamina through healing, which allowed him to train for 100 hours straight. Through mana regeneration, he can keep gnome summoned, have several layered shields, and even Cheon-Bu's Three principles on at 24/7 without running out of mana | Far superior to previously. | Immensely superior to before, can regenerate faster than he can normally use up mana and stamina. Were he to still run out, he'd regenerate it completely in 1 minute at most. | Superior to before

Standard Equipment: Various items kept in Inventory, as well as an immense amount of money. Has several items like Hearth of Golem, Toothpick, Staff of Hermes (Replica), and many others basic materials and food.

Intelligence: Gifted (Instead of learning English, he decided it would be faster to memorize literally every word combination and their meaning.) | At least Gifted. Far more experienced and smart than before. | Extraordinary Genius. Has a memory thousand of times that of an average human, and can calculate faster than a quantum computer. | Extraordinary Genius, almost on the level of Seeker of Truth, who was better at his branch of magic than beings that lived for several millennia. | Extraordinary Genius. Far superior calculation speed and memory than previously. Absorbed several books with knowledge about many branches of martial arts and magic, and had the equivalent of enlightenment in martial arts.

Weaknesses: Needs time to train, and has difficulty getting jumps in power if he can't slay enemies (Although the latter is mitigated by Instant Dungeons). Mental Stress can pile up after several hours worth of training if he doesn't eat, though it is suppressed during fights. | All previous to a lesser extent | Previous to a lesser extent. His magic is so strong that increasing his magic potency will start eroding his body. | All previous. Han has hit a roadblock as far as leveling up goes due to his human limits. | He no longer has problems with leveling

Ikki Kurogane (Rakudai Kishi no Cavalry) Ikki's Profile (7-B Han and 7-A Ikki were used, 1 day of prep)