Hakumen is one of the main characters in the Blazblue series, as well as the leader of the Six Heroes. He was originally Jin Kisaragi in an alternate timeline where Noel Vermillion did not exist, until he met Rachel Alucard, who saved his life from Nu-13 and offered him a chance to be a hero. He then became one with the Susanoo Unit and went back to stop the Black Beast during the Dark War with the aid of the Six Heroes and half the Earth's population. After the monster's defeat, he was questioning the humans, who then drove him into the Boundary, where he laid there for almost an entire century until the daughter of Nine named Kokonoe pulled him out to aid her in her mission to stop Terumi once and for all.

Classification: Former Human, Host of the Susanoo Unit, Leader of the Six Heroes

Superhuman Physical Characteristics, Acausality (Type 1 [Unaffected by Phenomena Intervention, which can reset the timeline]), Limited Glyph Creation (Can create glyphs when unleashing his power), Self-Sustenance (Types 1, 2 and 3 [Lacks any need for sustenance due to not having an organic body]), Non-Physical Interaction (Can cut through things with no physical form, such as alternate realities), Enhanced Senses (Can navigate through the boundary, an infinite space of nothing), Invulnerability (Exists outside of Logic, making him immune to any form of conventional weapons), Extrasensory Perception (Can see invisible beings), Air Manipulation, Portal Creation, Forcefield Creation (Anyone taught by the NOL can create barriers), Soul Manipulation, Healing and Regeneration Negation (up to High-Godly; Wounds inflicted by a Nox Nyctores scar the soul, which the victim cannot recover from even through Phenomena Intervention by Amaterasu, Nox Nyctores are also superior to Ars Magus, a weapon capable of killing the Black Beast, a creature that has the ability of Self Observation, which is what Terumi used to regenerate from Hakumen's Time Killer), Telepathy (Was capable of reading Ragna's memories), Instinctive Reaction (A Nox Nyctores fights, moves and warns the user without any consent), Spatial Manipulation (Tore a hole in the fabric of space and time to view an alternate event in the Continuum Shift), Causality Manipulation (Capable of creating causal drifts with only his ego), Aura (Merely being in his presence caused Ragna to become paralyzed), Immortality Negation (1, 3, and 9 [Was capable of killing Arakune]), Paralysis Inducement (Can passively paralyze those he sees), Precognition (Capable of predicting attacks using his mind's eye), Time Manipulation (The Susanoo Unit slashes time), Existence Erasure (Time Killer completely erases the target's "time", removing their existence from the past, present and future without causing a paradox), Immortality (Types 1, 5 and 9; As an "uncertain factor", he is neither alive nor dead, and his true body exists in the Boundary), Reactive Power Level (The larger the threat to the world becomes, the stronger the Power of Order will make Hakumen), Power Nullification (Ōkami can nullify abilities), Light Manipulation (The Susanoo Unit produces light), Statistics Amplification (Via Overdrive), Cosmic Awareness (Is aware of other timelines), Regeneration (Low; Stated to heal at supernatural speeds during the events of Phase Shift) and Limited Subjective Reality (Power of Order can make something that doesn't exist exist)

Resistant to the following: Empathic Manipulation (The Nox Nyctores can shut down the user's emotions), Paralysis Inducement (Could fight Nu normally, who could paralyze with her strikes), Transmutation (As a chosen, he's unaffected by the Embryo's effect to turn everything into seithr), Poison Manipulation, Madness Manipulation, Biological Manipulation, and Statistics Reduction (Everybody can resist Seithr to some extent which is poisonous, can induce addiction and deteriorate bodies, as well as reducing the power of others), Deconstruction (Is capable of being near a Black Beast without deconstructing as it's stated to do in Phase Shift), Phenomena Intervention (The Power of Order overpowers Phenomena Intervention, even by the Takamagahara System and The Embryo), Time Manipulation (Can resist the effects of Cauldron and the Boundary, which stops time by existing), Technology Manipulation (Is unaffected by the effects of Seithr, which can mess with technology), Absorption (Can fight the Black Beast without being absorbed), Mind Manipulation (Able to resist the Boundary/Cauldron, which when entered or get closed, will result in taking infinite information, dating across beginning of time and all possibilities, is also unnaffected by the Embryo's mindhax), Sealing (Resisted sealing during Phase Shift), Perception Manipulation (Resist the effects of Ars Magus, which nullifies senses of the user), Petrification and Gravity Manipulation (As someone with competent skills in Ars Magus, he should be able to replicate an Ars Magus barrier, which is stated to protect the user from these effects), Body Puppetry (Unaffected by body puppetry effects of the Nox Nyctores), Absolute Zero and Life Manipulation (Could withstand Yukianesa's strikes, which can freeze Azrael and erode away life), Soul Manipulation, Healing and Regeneration Negation (up to High-Godly), and Fear Manipulation (Is capable of fighting against Ragna numerous times with the Azure, which can inflict soul damage beyond the help of a multiversal entity, and negate any form of Recovery, is also unfazed by his passive fear hax, can also shrug off the regeneration negating effects of the Azure, which is superior to the Nox Nyctores, which are superior to Ars Magus, weapons that are capable of killing the Black Beast, a creature that has the ability of Self-Observation, which is what Terumi used to regenerate from Hakumen's Time Killer), Precognition (Surprised Yūki Terumi in spite of his ability to observe all possibilities), Physics Manipulation (Could tanks blows from Azrael, who is so strong that he bends and breaks physics whenever he strikes), Existence Erasure/Void Manipulation, and Corruption (Type 3) (Can resist the effects of the Boundary, which can erase those that enter it, and corrupt them beyond recovery in a similar fashion to what happened to Arakune), Spatial Manipulation, and Explosion Manipulation (Was able to withstand Bolverk, a Nox Nyctores which can pierce through space), Heat Manipulation (Is unfazed by the intense heat from a cauldron), Corrosion Inducement (Resists getting corroded by the Cauldron), Illusion Creation (Is able to see through the illusions made by the Embryo, and is capable of slicing through said illusions), Death Manipulation (The Power of Order can negate the Immortal Breaker), Law Manipulation, Water Manipulation, Earth Manipulation, Fire Manipulation, Air Manipulation, Darkness Manipulation, and Light Manipulation (Exists outside of Logic, the fundamental rules of the world, which includes the 4 elements and Two Great Origins), Chaos Manipulation (Is capable of resisting the Boundary's effects to manipulate Chaos), Power Nullification (Is able to use his powers despite Kushinada's Lynchpin being activated) and Attack Negation (Able to permanently damage Es)

Lifting Strength: At least Class T (Should be far stronger than Ragna in Chronophantasma)

Range: Extended melee range with Ōkami, Low Multiversal with hax (Is capable of ripping holes through reality to witness different events occur in the continuum shift)

Intelligence: Very High (Is formerly Jin Kisaragi, who's one of the best students in his time, as well as being not only the Hero of Ikaruga but being the leader of the Six Heroes during the Dark War)

Weaknesses: If Hakumen does not stand by his convictions, the Power of Order will see him as weak and not be of use to him.

Hakumen in the Phase Shift novels 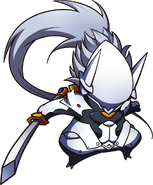 Hakumen's chibi portrait
Add a photo to this gallery

BlazBlue Central Fiction - God Of War (Hakumen VS Susano'o)-0
God of War, the theme of Hakumen and Susanoo's fights

BlazBlue Chrono Phantasma OST SIX HEROES
The theme of the Six Heroes.
Add a photo to this gallery