VS Battles Wiki
Register
Don't have an account?
Sign In
Advertisement
in: Characters, Male Characters, Visual Novel Characters,
and 39 more 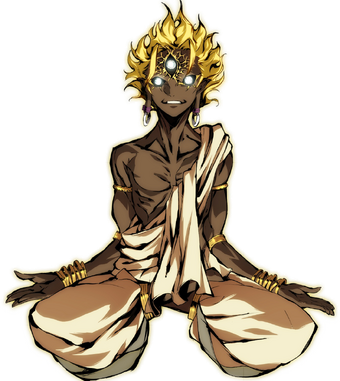 In the era in which Marie presided over the Throne as the Fifth Heaven, a group of cultists who were bored with the happiness she wrought under the cycle of reincarnation she created decided to try to supplant her with a new god. Purchasing a boy that did not react to outside stimuli, they gave this boy the divine title Hajun before mummifying him while he was still alive and burying him within a five-fold mausoleum that didn't allow a sliver of light to penetrate it.

But Hajun's soul was far more powerful than any of the cultists realized. The world or its sensations did not matter to him and he only sought the feeling of solitude. But he was even denied that, since the phantom sensation of the twin brother he absorbed in his mother's womb, simply known as the Teratoma, continued to irritate him. Thus this embodiment of self-love and narcissism began to lash out as his soul ascended to godhood. Mistaking the feeling of his twin brother's remnants for the touch of the Fifth Heaven, he forcibly seized the Throne and killed all of the Hadou Gods in existence, except Ren Fuji. From then on he continuously attempted to enact his Law to achieve total isolation, with his efforts only being halted by Ren's, now known as Tenma Yato, desperate struggle.

All the abilities and weaknesses of a Hadō God, Cosmic Awareness and Precognition/Clairvoyance through Tengan (Possess a Tengan higher than that of Yakou Madara, same Tengan being the one he granted to him), Power Bestowal (Granted Yakou's Tengan and initial law. Metsujin Messo can also reward others by strengthening them to absurd levels), Empathic Manipulation and Morality Manipulation (The manifestation of his law makes everyone kill the other because of their narcissism. His pressure seemingly dashes the opponents very will to stand against him), Mind Manipulation and Fear Manipulation (His bloodlust creates an immense and unbearable pressure upon others' minds and causes them to be unable to act against him), Existence Erasure (His law, once completed, will erase all of existence, leaving only him), Death Manipulation, Life Manipulation, Resurrection, and Regeneration Negation (His gaze seems to create a Law telling others to "Die", causing those harmed by him to be unable to naturally regenerate. He also possess Yakou Madara's first law, can inflict death on everything, this include creating various phenomenon such as turning a ritual meant to extend one's life into its opposite or even kill parts of reality. He can also use it on himself to "kill" his own concept of death, allowing him to resurrect), prevents stamina from recovering

All base abilities minus Reactive Power Level

Attack Potency: Hyperverse level (At full power, Hajun is the most powerful character in the entire series. Effortlessly killed Reinhard, Marie and Mercurius, and would have killed Ren as well had he even paid attention to the latter's existence. He has a Taikyoku value listed as "Immeasurable" that is constantly rising. Is also immensely superior to his Throne self) | Hyperverse level (Despite being weakened from having infinite souls clinging to him due to his status as the Throne God, he is still immensely powerful that not even the combined might of the Gudou Gods could defeat him directly. Defeated Shiori, Soujirou, Yakou and Ryuusui by using the shades of the Hadou Gods. These shades hold but a mere fraction of the original Hadou power. As the strongest God, dethroning him with power only is impossible, with his Taikyoku value listed as "Immeasurable" that is constantly rising, whereas even Tenma Yato only has a Taikyoku value of 100; the latter god at his peaked power compared himself to Hajun like that of a human to a god. Were his Muryou Taisuu to be achieved at full power, it would have destroyed everyone and everything in existence, including the Throne itself, leaving only himself in the end) | Hyperverse level (Without the Teratoma, Hajun is a normal Hadou God and is vastly weakened, but is still immensely powerful for Marie, Reinhard, Ren, and Mercurius to defeat; even having taken down the former three with him to death at the end of their battle)

Speed: Infinite (Comparable to others Gods), Omnipresent in his territory

Durability: Hyperverse level (Completely tanked everything Reinhard, Mercurius and Ren threw at him, only considering it "mere noise") | Hyperverse level (Was unscratched by the attacks of Soujirou Mibu and Shiori Kujou. As the strongest God, dethroning him through power only is impossible, as the Eastern Team could only win against him due to specific requirements such as the existence of Habaki, who due to his nature, was the only one who could extract the Teratoma and turn Hajun into a normal Hadou God, attacking Hajun would only lead to him getting stronger as it removes the souls clinging to him) | Hyperverse level (Despite being weakened after having the Teratoma removed from him, it still took everything from Reinhard, Marie, Mercurius and Ren to finish him)

Intelligence: Sees the world through his own Tengan, which is supposed to make him all seeing, and also knows the capabilities of all Hadou Gods whose Laws were recorded within the Throne (Though he cannot use them properly due to how his Law conflicts with theirs). However, Hajun is insane, extremely self-centered and arrogant, and generally cannot focus on anything other than himself, rendering them virtually useless.

Weaknesses: Hajun is immensely arrogant and overconfident. After becoming a Throne God, he has extremely poor control over the Laws of other Hadou Gods due to the nature of his own, and absorbing large quantities of souls will noticeably weaken Hajun rather than boost his power like all the other previous Hadou Gods, although this doesn't affect his position as the strongest god. Removing his "Teratoma" (A separate being that subconsciously feeds Hajun power) will weaken him immensely. Temporally freezing the throne can halt Hajun's Law from being completed, as this was the case with Tenma Yato (Though it's stated that only Yato could manage to do so due to specific circumstances) 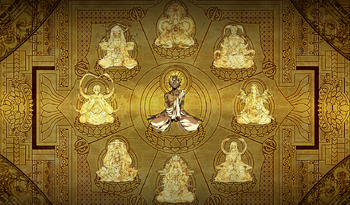 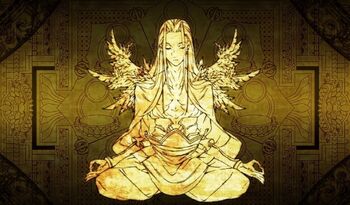 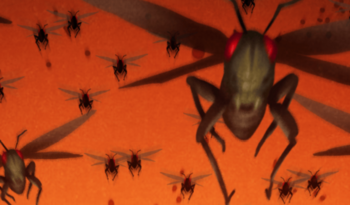 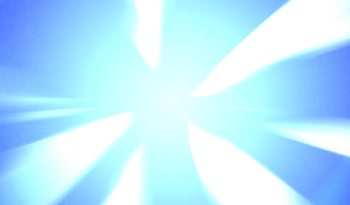 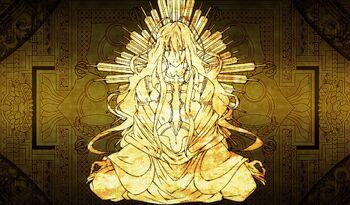 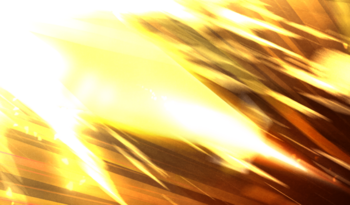 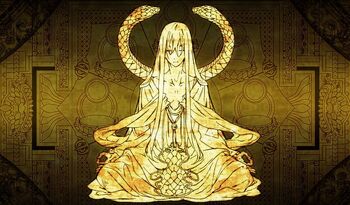 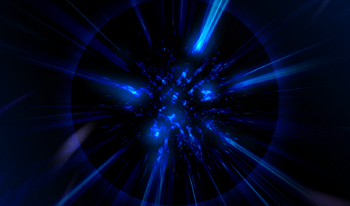 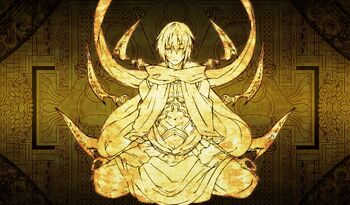 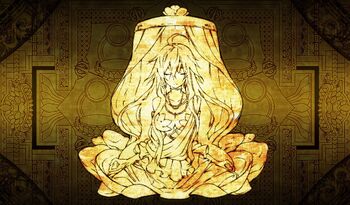 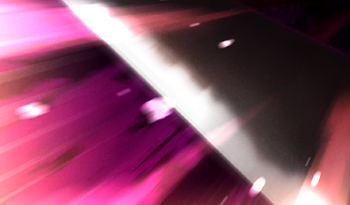 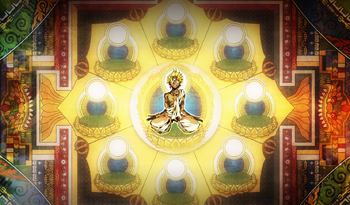 In the case of Reizen he is not only granted an immense increase in power, to the point that he was being stated as equal to Tenma Ootake (The latter not using his Taikyoku), but also 3 eyes of a Great Demon appear behind him which create an immense pressure through its unbearable murderous intent as it grates the very world around him, this pressure is inflicted upon one's Mind, Body and Soul causing your spirit to be crushed, will to be dashed and even your very stamina to be stifled. Another effect of this omnious gaze is that it seemingly creates a “Law” telling those caught within it to “Die” and “To not stand up, to not heal and to not keep on living” causing injuries inflicted by Reizen to not heal naturally.

Because of his abilities coming from Hajun's gaze itself, he should be able to inflict the same as Reizen on a comparable if not higher level.