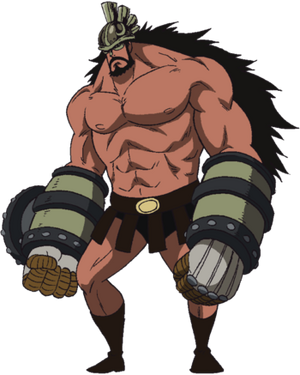 "Pirate Mercenary" Hajrudin is a giant warrior described as the "new generation" from Elbaph and joined as a gladiator at the Corrida Colosseum to compete for the Mera Mera no Mi. He was first mentioned by a Marine officer who was speaking to Vice Admiral Maynard. He is the sixth division leader of the Straw Hat Grand Fleet after the events of Dressrosa.

Stamina: High. Was able to bear the pain by delivering a finishing blow after most of his bones being crushed, fought against the other executives and their forces for a long period of time

Standard Equipment: Hajrudin wears giant gauntlets made of gold to allow him to hammer his fists down onto his enemies. He also wields a huge spiked club and seems to be quite proficient at using it, swatting a group of bounty hunters aside. He wasn't seen using it in the Colosseum, probably because of the weight-restriction

Weaknesses: His massive size makes him susceptible to AoE attacks 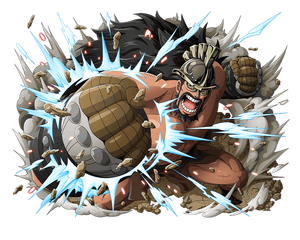 Retrieved from "https://vsbattles.fandom.com/wiki/Hajrudin?oldid=5009992"
Community content is available under CC-BY-SA unless otherwise noted.