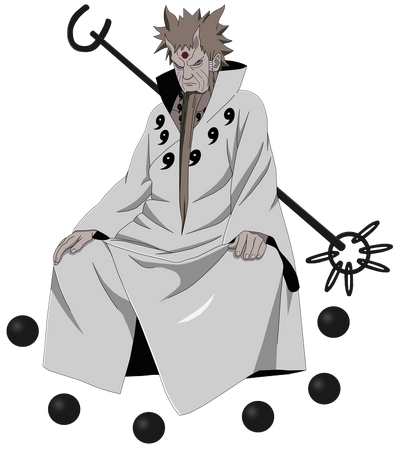 Hagoromo Ōtsutsuki (大筒木ハゴロモ, Ōtsutsuki Hagoromo), known to the world at large as the Sage of the Six Paths (Rikudō Sennin), was a legendary god-like figure who founded Ninshū, which led to the creation of the ninja world. He was the son of Princess Kaguya Ōtsutsuki and alongside his fraternal twin brother, was the first to be born with the same powerful chakra as their mother. Both he and his brother defeated their mother, who had become the terrifying Ten-Tails, in battle, and sealed the powerful beast within him, thus making Hagoromo the first jinchūriki.

Superhuman Physical Characteristics, Longevity, Chakra Manipulation, Longevity, Surface Scaling, Acrobatics, Earth Manipulation, Air Manipulation, Fire Manipulation, Electricity Manipulation, Water Manipulation, Yin Manipulation, Yang Manipulation, Yin-Yang Manipulation, Enhanced Senses, True Flight, Durability Negation, Creation, Aura, Sealing, Power Bestowal, Enhanced Senses, Energy Absorption, Summoning, Reality Manipulation, Weapon Mastery, Non-Corporeal as a spirit, Healing with the Preta Path and Naraka Path, Paralysis with the black receivers (Can paralyse and hinder the movements of targets, and also control them), Statistics Amplification (Can enhance his physical capabilities and speed with chakra), Regeneration (Low-Mid, scaling from Obito and Madara), Immortality (Types 3 and 7 Hagoromo has lived and continues to live in the pure world watching over the souls of the dead ever since his death and when he became a spirit), Extrasensory Perception (His sensory capabilities should be comparable to Naruto's, who can detect invisible clones that exist in a separate dimension), Limited Levitation, Telekinesis and Gravity Manipulation (Can control attractive and repulsive forces with the Deva Path), Body Control and Technology Manipulation (Can generate additional mechanical arms and weaponry such as blades, drills, missiles and cannons with the Asura Path), Resurrection (Can revive the dead with the Outer Path), Mind Reading and Soul Manipulation (Can read the minds of his targets and extract their souls by making contact with them with the Human Path), Summoning (Can summon various animals, some of which can fly and bombard targets from above, manipulate water, continuously split into separate entities when attacked, and a demon that instantly kills targets who lie, and can keep and transfer souls with the Animal Path), Matter Manipulation (The Truth Seeking Balls are superior to Onoki's Dust Release, which turns targets to dust on a molecular level), Limited Power Nullification (The Truth Seeking Balls erase and nullify ninjutsu, which includes energy and elemental based attacks, with the exception of those imbued with natural energy), Self-Sustenance (Type 1. Should be able to breathe in space like Toneri and 2 he is a ghost), Limited Invulnerability (Juubi Jinchūriki are impervious to ninjutsu, which includes energy and elemental attacks, with the exception of those that contain natural energy), Wood Manipulation, likely Forcefield Creation, likely Chain Manipulation, likely Healing, Dimensional Travel and BFR (Hagoromo can travel to and from the pure world using the reincarnates of Ashura and Indra and the power of the ten-tails and teleport others from different dimensions as well as bring and send souls from and to the pure world), Cosmic Awareness and Precognition (Hagoromo watches the world from the pure world and foresaw all the events of the 4th ninja war he could also sense the fight between Team 7 and Kaguya), Duplication (Spoke to both Naruto and Sasuke at the same time in each of their mindscapes), Life Manipulation (He gave Naruto this ability and his Creation of all things ability allows him to give creations life)

Attack Potency: Moon level+ (Moved the moon with Hamura Ōtsutsuki) | Moon level+ (Provided Naruto and Sasuke the ability to do the same, by his lonesome awarding him the full value of the calc)

Speed: FTL (Kept up with Kaguya, and both Naruto and Sasuke with half of his chakra were this fast even out of their prime) | FTL (Faster than before)

Range: Extended melee range, Should be hundreds of kilometers with jutsu scaling from other God tiers, Planetary with Chibaku Tensei, Cross-dimensional with sensing.