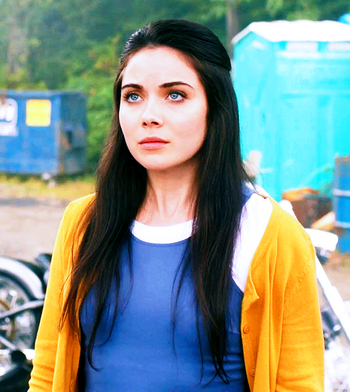 Hael was an angel that was cast out of Heaven by Metatron's spell. Since her fall and because of the loss of her wings, she no longer considered herself an angel. She made contact with Castiel, who was attempting to establish communication with the Winchesters.

Attack Potency: Town level (Carved the Grand Canyon, should be somewhat comparable to other Angels, though far inferior. An angel's mere cries of pain can produce ripple effects of strange incidents; Samandriel created destructive tornadoes across Nabraska while being tortured by Crowley)

Durability: Town level in Host (Regeneration and her nature as a Non-Corporeal being in True Form makes her very hard to kill)

Range: Kilometers for most abilities. At least Low Multiversal for teleportation

Intelligence: Very High due to Age and nature as an Angel

Note: This profile covers Hael at her peak, not her weakened state after falling from heaven and possessing a weak vessel.