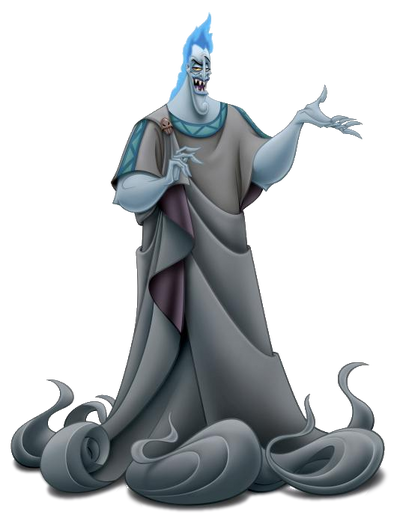 Hades is the Greek god of the Underworld and the main antagonist of the 1997 Disney animated feature film Hercules.

While the Hades of Greek mythology was not particularly malevolent, he is made into an evil figure in the Disney film, where he attempts to steal the Mount Olympus throne from his brother Zeus.

Hades is among the most popular Disney Villains, in addition to being one of the franchise's primary members.

Powers and Abilities: Superhuman Physical Characteristics, Immortality (Type 1, likely more as it was stated that gods could not be killed and Pain and Panic had to use a potion to take away baby Hercules' immortality before trying to kill him), Self-Sustenance (Types 1 and 2), Matter Manipulation, Soul Manipulation, Mind Manipulation, Creation, Magic, Power Bestowal, Power Nullification (With a potion, he can turn gods mortal, draining their powers and enabling them to be killed), Illusions, Necromancy, Intangibility, Body Control, Shapeshifting, Summoning, Flight / Levitation, Telepathy, Teleportation, Telekinesis, Energy Manipulation, Fire Manipulation, Smoke Manipulation, Resurrection, Resistance to Fate Manipulation / Life & Death Manipulation (As a god, Hades can't be killed by the Sisters of Fate)

Attack Potency: Likely Large Star level (Should be comparable to other Olympians, who can apparently casually create constellations. Always viewed Hercules as a non-threat. Broke the barrier Zeus created to seal the Titans)

Speed: Superhuman Movement Speed with likely Massively FTL+ Combat/Attack Speed (Shouldn't be much weaker than Zeus or other gods)

Durability: Large Star level (As a God, he can't be killed even by beings stronger than him. Survived an attack from God Hercules)

Optional Equipment: A potion that can turn gods mortal

Weaknesses: Any god can affect him and bypass his intangibility. He is also bound to any deal that he makes (When Megara was injured despite Hades promising she wouldn't be, Hercules immediately regained his strength). He can be rendered mortal by a special potion, and when using it on another, he has to make them drink it all. If a single drop is left, they will still retain their godlike strength.