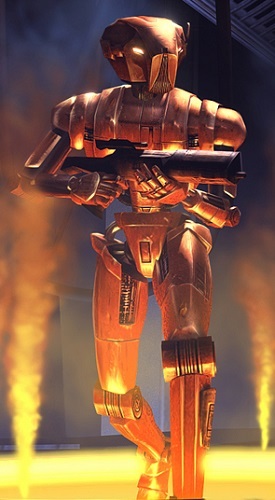 HK.47 is an Assassin droid created by Revan.

HK-47 was sent throughout the galaxy to assassinate countless targets whom Revan had deemed threats to galactic stability and peace. However, HK-47 was badly crippled and captured on a mission in Mandalorian space shortly before Revan himself was captured by the Jedi Order.

Its memory was wiped and he met again with his master, recovering his memory. Both parted ways shortly after, HK-47 was again captured and nearly destroyed, but he was found by Meetra Surik and he helped her on her quest.

Gender: Technically none but is programmed to be masculine

Attack Potency: At least Wall level to at least Multi-City Block level (Destructive power depends upon the weapon he uses)

Durability: At least Multi-City Block level (Should be no less durable than the Assault Droids made by the Star Forge)

Range: Several dozen meters with most ranged weapons; potentially upwards of 120 kilometers with a sniper rifle

Intelligence: Pure combat genius on both a tactical and strategic level. Is also incredibly sarcastic, cynical and apathetic to others