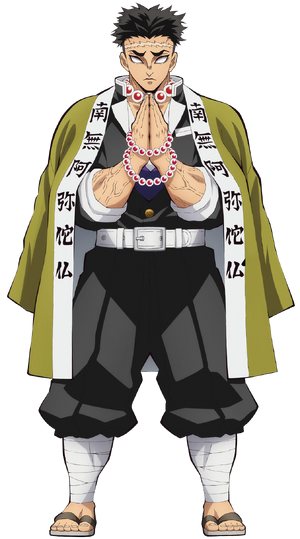 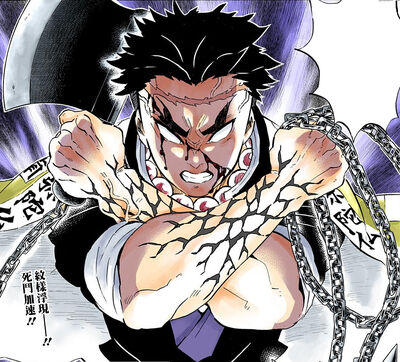 Superhuman Physical Characteristics, Acrobatics, Master Swordsman and Kusarigama-like weapon, Enhanced Hearing (Has supernatural hearing comparable to that of Tengen Uzui or Zenitsu, which allows him to fight despite being blind), Statistics Amplification (Breaths increase speed and power of humans to match Demons. Also has Demon Slayer Mark which also drastically boosts his power and speed), Body Control. Regeneration (Low. With breathing, one can stop blood hemorrhages), Information Analysis, Extrasensory Perception, Analytical Prediction with See-Through World (See-Through-World makes user see directly opponent's muscles, blood flow and movements which allows them to predict their next moves. Gyomei is capable of exactly imagining the opponent instead of seeing him, and can sense them), Absorption (Nichirin Blades absorb sunlight), Accelerated Development (Became Pillar in very short time compared to others like Muichiro)

Resistance to Fire Manipulation, Water Manipulation, Heat Manipulation (Demon Slayer Corps Uniforms protect against fire, water and cold), Fear Manipulation, Paralysis Inducement (As a Pillar he should be able to, like Giyu, resist the aura of Lower and Upper Moons. Unaffected by Muzan's aura that made Akaza bleed), Immense Pain Tolerance (Can shrug off intense damage), Enhanced Senses, Analytical Prediction, Extrasensory Perception (With See-Through-World, his intent becomes completely concealed and impossible to detect)

Attack Potency: At least Building level, at most City Block level+ (Is the strongest Demon Slayer of the current era which would make him stronger than the likes of Post-Pillar Training Tanjiro), City Block level+ with Demon Slayer Mark (Managed to cut Kokushibo’s neck and destroyed one of Muzan’s arm whips)

Speed: Massively Hypersonic+ (Could keep up and dodge many attacks from Kokushibo who later praised his speed and reflexes), higher with Demon Slayer Mark, higher with See-Through World

Lifting Strength: At least Class 50, likely Class 100 (Can push rocks larger than himself through an entire town. For comparison, Gyomei's height is 220cm. Is easily the strongest Pillar in terms of physical strength and ranks first in arm-wrestling between them)

Stamina: Immense. Pillars can train for months through training that almost puts them on verge of death. Gyomei didn't seem tired at the end of his long fight with Kokushibo. Gyomei has probably the highest reserves of stamina in the Demon Slayer Corps considering his extreme physical training.

Range: Few meters with his weapon

Intelligence: Above average (As a experienced Demon Slayer, he is quite analytical and intelligent in battle)

Weaknesses: Is blind, though he makes it up with his hearing and ability to use the See-Through World. None notable otherwise.

Retrieved from "https://vsbattles.fandom.com/wiki/Gyomei_Himejima?oldid=6041330"
Community content is available under CC-BY-SA unless otherwise noted.