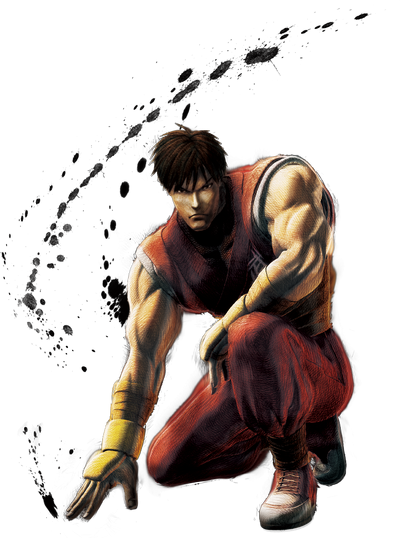 Lifting Strength: At least Class 5 (Can lift the same amount as a suppressed Cody)

Stamina: High (Can fight even while injured, he can still keep moving, can take on over 10 enemies all on his own, and at once. Just to finish and move on to the next horde)

Standard Equipment: Anything he can get his hands on.

Intelligence: Above Average (Very skilled combatant, practitioner of the Bushinryu Style, good with any weapon)

Weaknesses: Can jump to conclusions a bit too early.

Elbow Drop: Guy will perform an attack with the elbow as it descends toward the opponent.

Bushin Gokusaken: Guy will perform a light punch, middle punch, heavy punch and heavy kick or down with heavy kick, Guy will do its combination with the following attacks:

Bushin Senpukyaku: Guy launches himself into the air, foot extended and spinning, rising a certain height. Bushin Senpukyaku somewhat resembles the Tatsumaki, but with noticeable differences.

Bushin Izuna Otoshi: Guy grabs the opponent and tosses them to the other side of the screen. If Guy is any distance from the opponent, he will stop the somersault and flip upright, then drop vertically down with his elbow in front of him for a falling elbow strike. If, however, he is in extreme close range to the opponent, he will grab and flip over them, landing on his feet behind them, and then throwing them by the waist over his head and down into the ground.

Hiji Otoshi: Guy clasps his hands together and thrusts downwards with one of his elbows.

Kamaitachi: Guy plants a foot on the opponent and then performs a backflip kick. It can be used to strike from a distance.

Kubi Kudaki: Guy clasps his hands together and pauses for a single second, then strikes a downwards stabbing elbow which can hit twice.

Hayagake: Guy suddenly runs forward at full speed. Guy can do either of the following:

Hozanto: Guy does a quick advancing turn and violently jabs an elbow forward. The move can be use to evade projectiles.

Utsusemi: Guy stands waiting for the enemy attack, when the opponent hits Guy, he'll teleport to the other side of the opponent. This attack can be use for feints.

Bushin Hasoken: Guy will bring his hands together with two fingers of one hand sticking out in his trademark pose, then leap slightly up and forward into the air throwing a jab. If the jab connects, Guy will proceed with a barrage of punches and kicks, juggling his opponent ever higher into the air for 7 hits total.

Bushin Goraisenpujin: Guy performs four punches similar to those he does in the Final Fight games; if they land, he then backflip-kicks his opponent into the air. While his opponent is spiraling upwards, Guy leaps off the sides of the screen, before he grabs them and piledrives them into the ground for a great deal of damage. The move makes Guy invincible at the start allowing him to ignore damage.

Bushin Muso Renge: Guy grabs and gut-punches the foe, and roundhouse kicks them away. As the music changes and the screen goes white, he sprints behind them and strikes with a 5-hit combo, knocking them away before catching up again and delivering another 5-hit combo. During the combos, Guy's speed lines and blows are animated with the ink usually associated with Focus Attacks. Guy then finishes with 7 lightning-quick blows (for a total of 19). The foe slumps to the ground afterward.