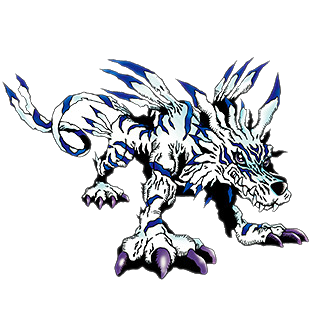 A Beast Digimon that is very similar to Garurumon. As a fiendish Digimon that lives in the dark, it is a nuisance who causes trouble everywhere. 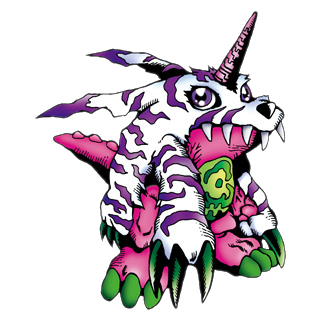 A Digimon characterized by its perturbing, flashy colors. It is said to be a variant of Gabumon. Although it has a personality that is as bright and showy as the colors on its body, it apparently turns cowardly when its fur pelt is removed, just like Gabumon.

Non-Corporeal (All Digimon are actually "souls" that exist on a higher plane of reality following an emanationism cosmology. Interactions with the Digimon that occur in the franchise are so because of specific events that either create manifestation bodies for the Digimon or turn humans into digital entities), Regeneration (Low-Mid. The Wireframe of a Digimon, corresponding to its armor/skin, is covered with a texture that is the first form of defense of a Digimon. Digimon are able to quickly regenerate their Wireframes after they are damaged, at least under normal conditions. Digimon are also able to completely regenerate their wireframes even after they are destroyed, forming the Digitamas, although this isn't combat applicable), Non-Physical Interaction (Digimon are able to touch each other, as well as their Digicores, which are the very essence of the Digimon. They are also able to touch the souls and minds of humans and animals like Koichi, Mirei, Takumi and Pete), Hacking and Information Manipulation (Digimon are the best hacking tools around the world, replacing almost entirely by any conventional hacking program prior to their discoveries and yet the best way to combat the Digimon is Digimon itself), Reality Warping (In fact, in Digimon hacking is the correspondent of Reality Warping in the digital worlds, and they are able to manipulate reality itself when necessary), Absorption (Digimon are able to absorb data from the surrounding environment and from other beings, allowing them to assimilate this data to itself), Power Mimicry (By absorbing opponents' data, the Digimon assimilates their powers for themselves. Digimon are able to learn the attacks of opponents just by observing them, although this is limited by the intelligence of the Digimon), Reactive Evolution (Digimon are able to rewrite their own data structures being able to adapt to different situations), Soul Manipulation, Mind Manipulation (Digimon attacks are able to interact with each others' Digicores, which constitute a Digimon's mind and soul. Hence, all Digimon are able to manipulate, attack, and destroy the minds and souls of others. Digimon are in essence a 5-Dimensional existence and even though they aren't physically this powerful, their mind and souls are still of a higher plane), Resistance to Mind Manipulation, Soul Manipulation (Digimon have their minds and souls, protected by the Wireframe, requiring one to cross the wireframe before reaching the minds/souls of a Digimon), Hacking and Power Nullification (Digimon are resistant to the bugging of the Eaters, which usually corrupt data leaving them useless)