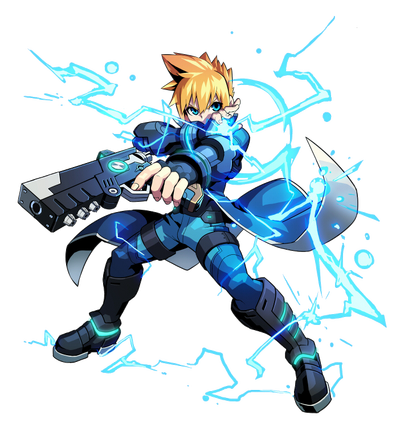 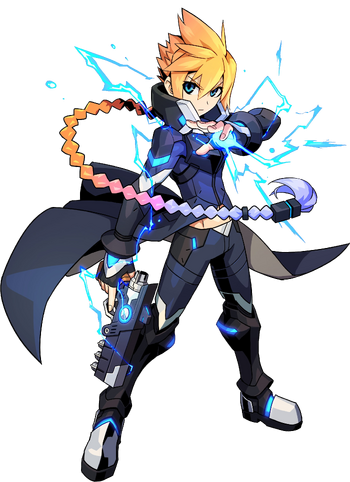 As an adept, Gunvolt's life had been one of chaos and rebellion against the humans that oppressed his kind using Lumen, a slave who was going to place adepts all around the earth under Sumeragi's control. Ironically, in the mission he was assigned to kill her, he ends up sparing her and they become close friends. That is, at least for a while...

Name: Gunvolt, Real name unknown (His real name was almost revealed in the CD Dramas before Nova interrupted him)

Powers and Abilities: Superhuman Physical Characteristics, Expert Marksman, Electricity Manipulation, Homing Attack (Can "tag" his enemies with his gun; tagged enemies will be chased by lightning bolts when his Flashfield is active. Characters comparable to himself cannot dodge these lightning bolts), Intangibility (Via Prevasion, turns his body into electrons to avoid attacks), Enhanced Senses (Said that he can see better in the dark than most people), Afterimage Creation (Gunvolt projects blue afterimages while Prevasion is active, as well as when it is triggered), Regeneration (Mid-Low), Can boost his damage output with Septimal Surge, Can air hop and rapidly accelerate along the ground or the air allowing for Pseudo Flight, can summon electrical chains to attack enemies with Voltaic Chains, Can conjure and wield massive swords made of raw energy via Luxcaliber, Magnetism Manipulation (Can control electromagnetic fields), Extrasensory Perception (Is able to see Joule as a spirit), Technology Manipulation (Can hack into and control electronics), Absorption (Can absorb electricity to recharge his EP and stamina), Resistance Negation (Azure Strikers can damage one another with electricity despite their typical immunity), Absorption Negation (Azure Strikers can't absorb one another's electricity), Possibly Non-Physical Interaction (Is able dispel Lumen with his electricity, who is a psychic projection that is similar enough to a soul for Joule's own soul to fuse with it. However, he cannot do any lasting damage to them), limited Power Nullification against spirits (Lumen's barrier stopped affecting Nova when Gunvolt used Flashfield on her), Immortality (Types 4 and 8. Reliant on Joule to bring him back with her Causality Manipulation). Anthem gives him unlimited EP, allowing Pseudo Flight and Elemental Intangibility, Power Nullification (Nullified Zonda's Paradise Lost when he used Anthem's power, so logically he should be able to do it when Joule uses her own power on him. Note that this is likely not resistance as Zonda was physically harmed when she stopped using the attack as opposed to her just stopping). Resistance to Petrification (Broke out of Else's Gorgon Gaze), Absolute Zero (Gunvolt can survive and break free of Tenjian's ice attacks, attacks stated to be below absolute zero and can shatter a person's molecular structure) and Electricity Manipulation (Stated that he was immune to electricity) | All aforementioned powers excluding Immortality, Awakened Power (Was able to use his own Anthem when Joule was removed from his body thanks to Joule saying her song was inside him)

Attack Potency: Large Town level (Is able to fight the Sumeragi Swordsmen, two of which were able to fight members of Eden's Seven without mirrior shards. Has about 1/11th of the power of his Gunvolt 2 self). At least City level with Anthem (When Joule was implied to be resisting her, Zonda stated that Joule's power had increased her own by a hundredfold. Since Joule willingly uses her power on Gunvolt, he logically would be even stronger) | Small City level (Fought Tenjian empowered by a Mirrior Shard, who froze over a city. Fought Ghauri, who's kinetic energy is on this level), City level with Anthem (Joule didn't have her full power for the entire game past the opening stage, but can still easily increase Gunvolt's power by a noticeable amount). At least Mountain level with Self-Anthem (Was able to fight Reverie Zonda and Copen empowered by a full powered Anthem)

Striking Strength: At least Street Class (Should be superior to normal humans in his verse)

Stamina: Very high. In both games, he fought for basically the entire night until the sun rose without any signs of tiring. Nearly bleed out on one occasion. Able to operate and commence a mission normally in a Sumeragi Biochemical Plant, which was so hot Gunvolt said it would have dehydrated normal people within mere moments.

Range: Extended melee range, can reach up to several meters with weapons and skills

Standard Equipment: His gun, the Dart Leader, which can fire many types of darts made from his hair or even pebbles or bullets if necessary. A Pendant made out of jewels by Joule. Also commonly uses contact lenses, other pendants, clips and rings to do things like increase his stats, increase his number of tags, allow him to air hop, air dash and various other things. A list of GV's equipment can be found here

Intelligence: At least Above Average, likely Gifted in combat (Very experienced in combat and survival, due to originally being enlisted in QUILL as a child, and therefore must have been embarked on an uncountable amount of missions, especially involving combat. Is considered highly intelligent for his age. An SS-Rank member of QUILL, which mostly specializes in guerrilla style warfare, though occasionally switches to head on attack operations, trained in a form of karate known as Chatan-Yara Kusanku. Able to quickly come up with a solution for fighting Elise as soon as they started to revive each other)

Weaknesses: Suffers a temporary loss of powers if he attempts to use them while submerged with water up to higher than his torso (particularly water with dissolved Sodium Chloride/Salt). He has a limited amount of EP and SP to use his abilities, and running out of EP causes him to "overheat", forcing him to stall for time and recharge before he can use them again for about 3 to 5 seconds. Is selfless to a fault. Has poor eyesight without contact lenses or glasses. Literally forgot he had healing abilities at one point | All from before as well as if Joule's soul is removed from his body during Anthem, he'll lose the increased power (Though the one time this did happen, he quickly regained it by realizing Joule's song is within himself) 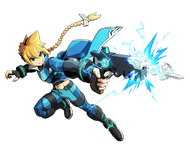 Alternate artwork for GV in the first game 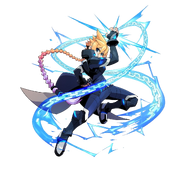 Alternate artwork for GV in the second game

Gunvolt's bio in the Anime 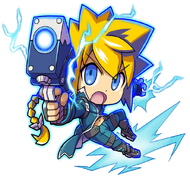 Gunvolt as he appears in Mighty Gunvolt

Copen (Azure Striker Gunvolt) Copen's Profile (This was Gunvolt 2 GV and Copen. Both were given three months of prep time)