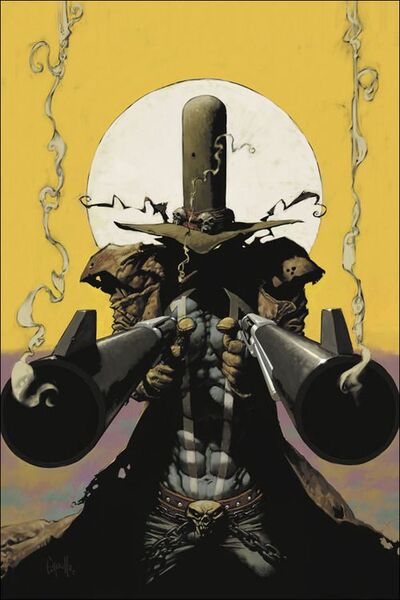 Francis Parker (who later took the name "Henry Simmons"), was a deserter who was to be lynched alongside another man, Jeremy Winston, in the town of Bane. Winston, a preacher, had been framed for murdering his family and was condemned to death. Mammon approached both men offering them a chance for revenge against those who have wronged them, an offer which Parker refused but Winston accepted. During the proceedings of the execution, Mammon causes a malfunction that ultimately saves Parker's life, however, Winston is killed. A short time thereafter, Winston is resurrected as the Gunslinger Spawn and he proceeds to slaughter every resident in the town of Bane, sparing only Francis Parker, whom Mammon ordered be kept alive. The Gunslinger Spawn confines Parker to a pine casket belonging to a now deceased resident of Bane, Henry Simmons, and floats the coffin down a river to an awaiting Mammon, who tells Parker that one of his descendants will become the Hellspawn that destroys the world.

Tier: At least 9-B, higher with revolver

Attack Potency: At least Wall level (Easily tanked a dynamite stick exploding at point-blank range in his face), higher with revolver (Blow up human heads and limbs with ridiculous ease)

Speed: At least Athletic Human (Hunts down every cowboys in the town), Subsonic+ attack speed with revolver

Weaknesses: Can be killed if decapitated by Heavenly Weapons, has Limited Necro-Energy

Retrieved from "https://vsbattles.fandom.com/wiki/Gunslinger_Spawn?oldid=6146510"
Community content is available under CC-BY-SA unless otherwise noted.