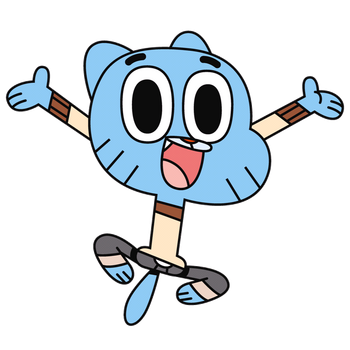 Gumball Watterson is the titular protagonist of the Cartoon Network series, The Amazing World of Gumball. He is a twelve-year-old blue cat who attends Elmore Junior High with his adopted brother, Darwin Watterson, and their younger sister, Anais. He is the eldest child of Nicole and Richard. Gumball is an imaginative, sarcastic, and eternally optimistic cat who often finds Darwin and himself in mishaps, usually originating from his antics.

Origin: The Amazing World of Gumball

Powers and Abilities: Superhuman Physical Characteristics, Toon Force, Regeneration (Low-High. In The Secret, he and Darwin instantly reformed after being in a machine that reduced them to droplets. Spontaneously reshaped himself after shattering to pieces in The Crew), 4th Wall Awareness, Spatial Manipulation (Seen here), Hammerspace, Time Manipulation, Time Stop (In The Countdown, he accidentally broke the screen, causing time to stop), Time Travel (After unintentionally breaking the screen, he could travel through time as far back as prehistoric times and The Big Bang), Reality Warping and Summoning with the Phone, Imagination Empowerment, Energy Manipulation (seen here), Video Game Materialization with the Console, Limited Shapeshifting (Partial Conversion since Gumball once stretched his arm to reach an airplane, extended his tail, and made his body stronger with muscle supplements; Partial change of appearance when Gumball and Darwin looked like Richard in "The Kids" and became temporary older in "The Finale"), Can stop himself from aging, Can survive without his brain in his body, Immortality (Types 1, 2 and 3), Non-Physical Interaction (Can touch Carrie Krueger), Weapon Mastery (Can utilize a paintball gun, as seen in The Fridge), Teleportation (Seen here), Immersion, Mind Manipulation (Seen here), Probability Manipulation (With the Helmet), Empathic Manipulation (Utilized love-inducing arrows in The Matchmaker), Gravity Manipulation (Seen here), Limited Technology Manipulation (made a cash register say "Please do it, Larry"), Body Control and Elasticity (Can easily stretch his ears and limbs), Fusionism (By merging with Darwin), Death Manipulation (With his glare), Explosion Manipulation (Can cause people to spontaneously explode), Self-Matter Manipulation/Biological Manipulation (Can modify his DNA), Flight (With Witch Broom), Ghost Transformation (With Potion, which grants Non-Physical Interaction, Levitation, Telepathy, Intangibility, Invisibility, and Possession), Some resistance to Sound Manipulation (Survived Darwin’s ear-shattering yell, although he did complain about his ears hurting afterward), Possession (Fought off Carrie trying to possess him, although he did greatly struggle with this), and Time Stop (Has shown multiple times to be unaffected by this)

Attack Potency: Building level (Can trade blows with those who can harm him, such as Darwin Watterson. Capable of trading blows with Rob, who's able to withstand a gigantic explosion before falling from extreme heights. Accidentally cracked Penny's shell, which was undamaged by lightning)

Speed: At least Superhuman (Can keep up with speeding cars)

Intelligence: Surprisingly above average (Although he isn't remarkable in terms of academics, he is imaginative and very creative. He is good at thinking strategically and laying out plans. Certain episodes such as The Mystery show that Gumball can be highly analytical. When he got a job at Joyful Burger, he worked his way up to become the CEO of the entire company, sold his shares and retired as a multi-billionaire; all in just one day. Can play the banjo. However, he was completely unaware what the word 'procrastinator' meant, he continuously acts naive and egotistical, he ignored his family's clear warnings that they were being watched by cameras in The Safety, and he usually makes bad grades in school)

Weaknesses: He is naive and is prone to making ignorant decisions. He lacks combat experience. Is highly afraid of water and can't swim. Tends to be cowardly, and to some extent, rather cocky.

Homer Simpson (The Simpsons) Homer's Profile (Speed was equal, both were bloodlusted, Homer had full arsenal)

Chowder (Chowder) Chowder's Profile (Both were bloodlusted and speed was equalized)