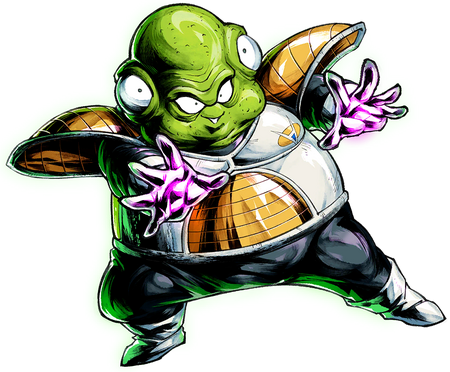 Guldo (グルド) is a supporting antagonist in the Dragon Ball manga, and the anime Dragon Ball Z. He is the smallest and least powerful member of the Ginyu Force, physically. Guldo possesses some psychic abilities, including being able to stop time; this seems to be one of the primary reasons he has attained membership to the Ginyu Force. Guldo's literal Japanese name is Gurudo, which is derived from yōguruto (yogurt).

Speed: Relativistic (Via power-scaling from Nappa)

Stamina: Below average (Can't hold his breath all that long, gets tired out from repeatedly freezing time)

Weaknesses: His Time Freeze requires him to hold his breath, greatly limiting how long he can use it for. The Time Freeze uses up a lot of his energy; if he uses it three times, he won't even be able to fire basic ki blasts. Has poor stamina. He lacks a Scouter and cannot sense energy.

Standard Tactics: Guldo will typically use his Time Freeze technique so that he can escape his foes or attack. If Guldo feels that the foe is beneath him and is a weakling, he will fight more directly, such as the case with Chiaotzu. If Guldo is unable to fire a ki blast due to overusing his Time Freeze technique, he will simply hide while time is frozen in the hopes of recovering energy while the foe looks for him. He does not know about ki sensing nor can he suppress his power, so this tactic is useless against those who can sense energy. If he finds himself in trouble and is desperate, he will paralyze his foe.