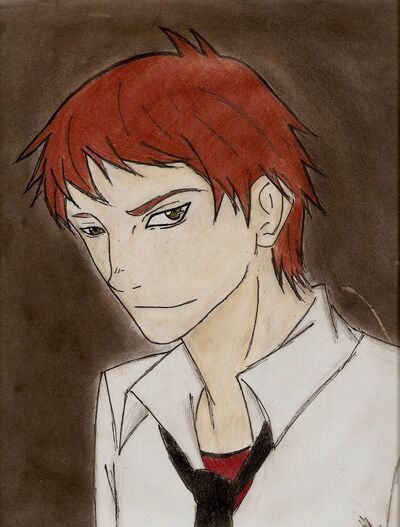 Grubbs (or Grubbitsch) Grady is a werewolf, magician and 1/3 universe-killing demonic super-weapon.

He was a perfectly ordinary teenager, playing sports, making friends and doing very well in school. However all of that changed when, one day, his family was slaughtered by the demon master known as Lord Loss. After suffering a mental breakdown, Grubbs went to stay with his Uncle Dervish and- despite his hopes- was far from past his troubles. He discovered that his family were werewolves, due to breeding with demons thousands of years ago, and a small number of them would turn into savage and unstoppable powerful supernatural monsters either late into their childhood or early into their adolescence. Upon trying to find a cure for his younger half-brother after he turned, Grubbitsch was forced to encounter Lord Loss once more. And after he beat the demon master at chess, he swore an oath of revenge against Grubbs. Soon after this Grubbs was involuntarily introduced to the world of the disciples. Powerful Mages who traveled the world and stopped demonic incursions at the behest of the Magician Beranabus. Unlike ordinary mages, magicians do not require a source of magical energy in order to use magic- and though their powers are greatly diminished without one they are still formidable.

Powers and Abilities: Superhuman Physical Characteristics, Magic, Elemental Manipulation, Transmutation (Could transform his limbs into metal blades), Enhanced Senses (Described his werewolf vision as being like looking through a telescope), Telekinesis (Stated he was able to move objects across a room with his magic), Pain Manipulation (Could dull the pain of healing himself with magic), Regeneration (High-Low, capable of reattaching lost limbs and fixing horrific burns in a matter of moments)

Attack Potency: Wall level (Conjured a magical shield to stop dozens of bullets at once and maintained it after the window he was using faded. Was confident he could stop at least several gunmen from killing disciples in their climb down a mountainside. Even regular magicians are said to be capable of "changing the shape of the world with a click of their fingers" however this is likely an exaggeration) | Building level (Fired an energy blast at Juni Swan which he claimed was going to "tear her atoms apart". Can easily kill lesser demons which can survive bullets with little damage) | Universe level (Stronger than Beranabus, who could kill a demon the size of a universe with Kernel's assistence. Regularly fights Lord Loss who, as a demon master, should be far stronger) | Low Multiverse level (The Kah-Gash is an intrinsic law of the universe, like gravity or death. It easily destroyed two universes, killing all but a single demon master dwelling within - the strongest of which were able to kill Magicians and lesser Masters in an instant)

Lifting Strength: Superhuman (Could lift a large lodestone, which can be several meters wide and tall, over his head and throw it at a wall hard enough to shatter it)

Striking Strength: Wall Class (Can crush skulls and rip off limbs) | At least Building Class (Can amplify his strength to damage demons, which can survive his other magical attacks) | Universal (Should be comparable  to his other magical enhancement) | Unknown, likely Low Multiversal in a physical body

Durability: Wall level (Can survive physical strikes from werewolves which can tear humans apart and rip through metal with their hands) higher with magic (Can use shields to stop many bullets and even explosions.) | Building level (Can take hits from Lord Loss who could easily tank the same energy blast that would have atomized Juni) | Universe level (Can survive hits from Lord Loss, who should be far superior to the demon that made up an entire universe) | Low Multiverse level (The Kah-Gash was only originally broken by the combined efforts of the most powerful demonata and an equally powerful race of Old Ones. This was only possible because it was incapable of mustering the willpower to actively defend itself.)

Stamina: Low (Magic is draining for magicians without a source of power.) | Very High (Using a window or lodestone allows Grubbs to use magic with seemingly no limit, in addition to reattaching lost limbs and regenerating other injuries.) | Very High (Mages in the demonata universe can perform magic without showing any signs of fatigue at all) | Unknown

Intelligence: High (Described as quite intelligent, was able to deduce that he was in an illusion by remembering that he had been covered in blood earlier) | Omniscient (Bec recorded every single detail in the universe while Grubbs was destroying it, allowing the Kah-Gash to recreate it. The Kah-Gash exists everywhere in both universes at once)

Weaknesses: Using magic without a window tires him out extremely quickly, healing himself requires the use of a hand to concentrate magic.

Kah-Gash link: By linking up with Bec, Kernel or both. Grubbs is able to draw out a fraction of the Kah-Gash's power. When he was linked with Bec and Kernal he described the power he was using as "ten times" what he'd ever done before, and then went on to increase that by a considerable amount to hold off the combined effort of an army of millions of demons later on in book 9. However Grubbs can only draw out so much energy without rescinding control, at which point he will likely destroy the universes and return them to their original state as one.

Demon Bomb: By filling a demon's body with magic, mages are capable of creating a small explosion capable of destroying magical barriers. This explosion is so potent that at age 14 Grubbs, while his powers were far from their peak, was able to create an explosion powerful enough to punch a hole in a barrier so strong that even Lord Loss was incapable of breaching it. However he cannot do this without a magical creature, and it is possible the explosion does not damage anything other than magical barriers as it has never been used on anything else.

Window Creation Spell: Using a spell taught to him by Beranabus, Grubbs is capable of constructing a window to the Demonata's universe. However he is decidedly rubbish at it, and it can take him anywhere from one to eight hours to do- making it useless in a battle.