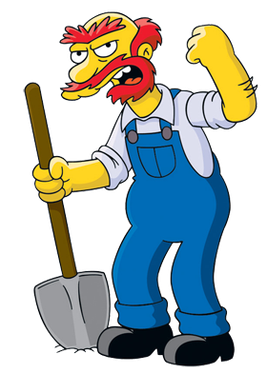 William MacMoran is the groundskeeper for Springfield Elementary. He often is referred to as Groundskeeper Willie, and is a very proud Scotsman, though his past is very shady and clouded with mystery. He consistently lies and changes his past including his father being killed, him being incapable of firing a gun, and the part of Scotland he comes from. He has even made up stories where he himself didn't come out alive. It's likely that Willie is crazy, as him being connected with a famous killer known as The Aberdeen Strangler is something he didn't even try to deny. As well, he has accidentally killed at least two other students. He is dysfunctional and has drinking issues along with his hot headed temper.

Speed: Supersonic (Reacted to a wolf pouncing at him, kept pace with Santa's Little Helper who is nimble enough to outrun Homer. Comparable to Principal Skinner)

Lifting Strength: Class 50 (Physically overpowered an Alaskan Timber Wolf and a mule, often made out to be the strongest one in town)

Durability: At least Building level+ (Comparable to his Attack Potency, wrestled with a Timber Wolf)

Range: Standard melee range, Extended melee range with A Pitchfork, A Shovel, and other Gardening tools

Intelligence: Below Average (Willie has shown to be so far behind on education, even Bart is smarter than him, even when it comes to school education, However, he still is a decently skilled fighter and has claimed to have been fighting for years