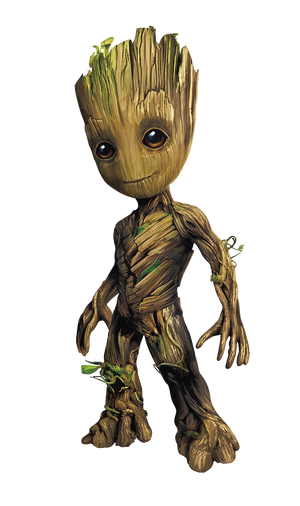 Groot is a hyper-intelligent, tree-like organism from the species Flora colossus native to the planet X. While he possesses human level intellect, Groot's robust and heavyweight physiology causes the organs of his acoustic generation to become stiff and inflexible, rendering the limits of his speech to the simple phrase, "I am Groot."

Lifting Strength: At least Class 100 (Should be stronger than his teenage form) | Above Average Human (Can throw a man but struggles to pull desks around) | At least Peak Human (Lifted 3 Outriders with his vine)

Durability: At least Building level, higher using his shields | Street level | Building level (Was able to resist the heat of a newly-forged Stormbreaker)

Stamina: Superhuman, probably limitless (He didn't show signs of getting tired after minutes of fighting)

Weaknesses: Groot literally can´t communicate correctly, and if his body is nearly destroyed, he will require a lot of time to regenerate. | He is not much larger than a human hand. | Same weaknesses as his adult form.