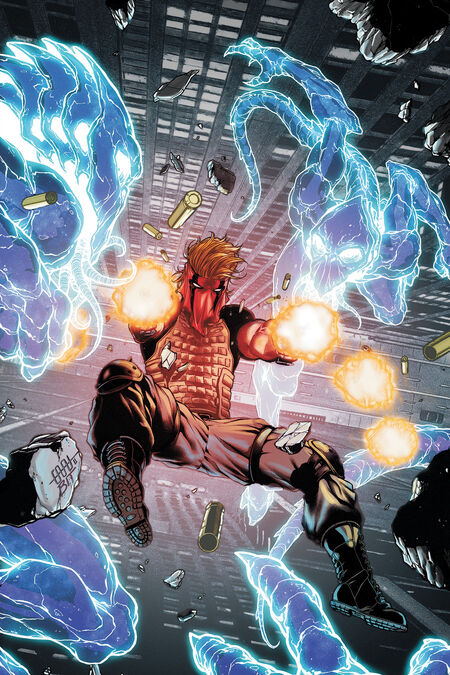 Cole Cash is a former U.S. Army Special Ops soldier who deserted and became a con artist. After the Daemonites attempted to possess his body, he ended up as one of the most wanted men alive. Hiding his face under a mask, he wages war on the Daemonites as Grifter. His firearms expertise makes him an incredible marksman and one of the most dangerous men in the world. Through Daemonite experimentation, he also gained telepathy and telekinesis.

With their father killed when they were children, Cole and Max Cash were raised by their mother and abusive step-father. Cole left his family embarking on a life of crime. Despite being a criminal, he had a code of honor. He was recruited into International Operations, demonstrating exceptional marksmanship and great potential. As a former Delta operator for the U.S. Army, Cole Cash made a living for himself and his girlfriend Gretchen as a con man. He was on the verge of his biggest score when he was abducted by the Daemonites, an alien race secretly infiltrating Earth by taking human bodies as hosts. They attempted this process on Cole only for him to awaken prematurely and escape. The experience left him with the ability to sense the Daemonites and hear their telepathic communications, making him a target. Since only he could perceive the Daemonites, his actions against them quickly had him deemed a murderer and terrorist by human authorities. He is now hunted by aliens and humans alike, donning a mask and becoming Grifter.

Age: Somewhere in his 30s

Attack Potency: Building level (He was able to lift a considerable amount of trees and rubble, and dump it on an enemy)

Speed: Supersonic+ combat speed (He can react and catch arrows barehanded and bullets with his telekinesis. Able to fight as fast as Green Arrow, Nightwing, and the Midnighter.

Durability: Unknown (He went toe-to-toe with the Midnighter in a fist-fight)

Range: Thousands of meters with firearms and telekinesis.

Retrieved from "https://vsbattles.fandom.com/wiki/Grifter_(Post-Flashpoint)?oldid=5537866"
Community content is available under CC-BY-SA unless otherwise noted.