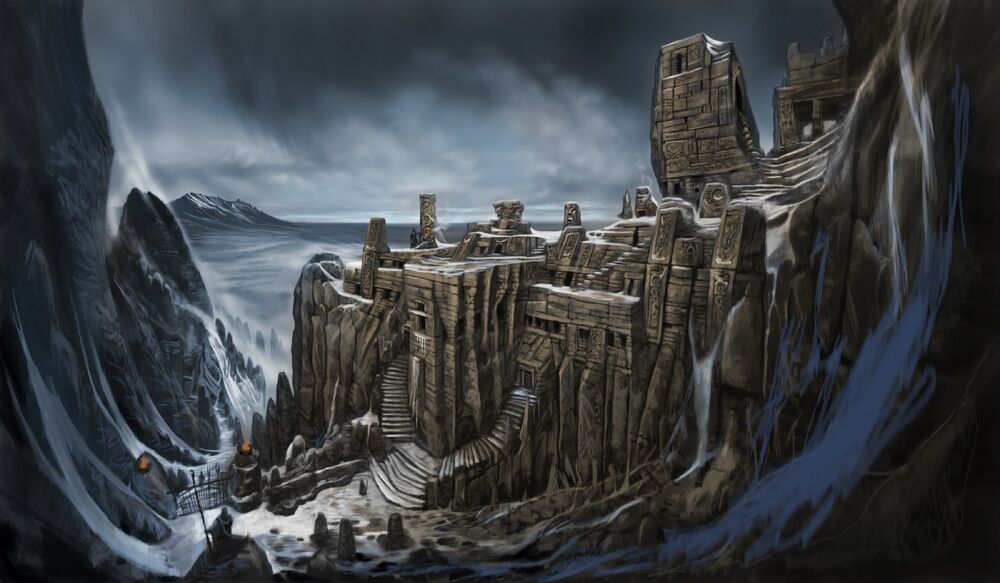 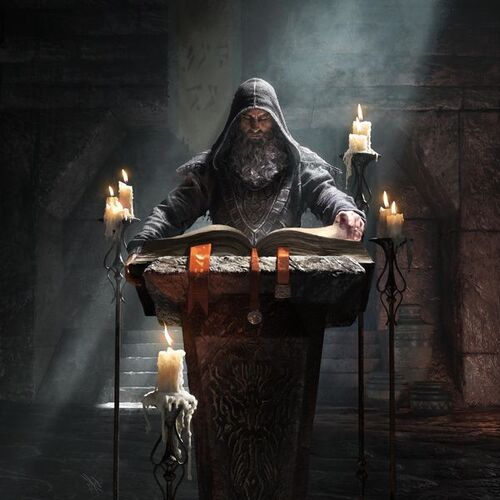 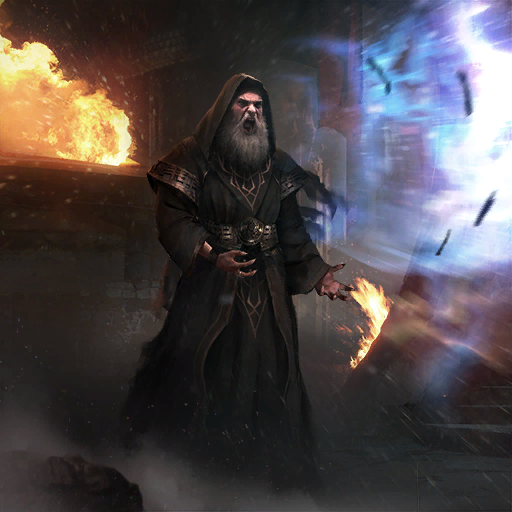 The Greybeards, an ancient and honored order of monks, live in silence at the ancient monastery High Hrothgar near the summit of the Throat of the World. They are the most famous of the Tongues, or masters of the Voice. Jurgen Windcaller founded the order in response to the Nord army's defeat at the Battle of Red Mountain circa 1E 416. After the battle, he meditated for approximately seven years, and arrived at the conclusion that the power of the Voice should be used primarily as a means of attaining enlightenment, rather than a tool of war. Jurgen called his new philosophy the Way of the Voice, and preached a lifestyle of meditative study of the Voice which the Greybeards carry on to this day.

Paarthurnax, the Grand Master of the order, made his home alone above High Hrothgar, at the summit of the Throat of the World. Master Argneir is the most powerful of the human Greybeards, and Paarthunax is the most powerful Greybeard of all. The other Greybeards cannot speak, as their voices are too powerful and would cause destruction. Master Arngeir handles the outside affairs of the Greybeards and the outside world. These Greybeards safeguard and study the knowledge on Thu'um, and of course they promote it in a peaceful way. Thus they rarely have a keen of using Thu'um for wars and aggression, which many Nords saw them as pacifists. While the Greybeards apparently accept almost all who show a talent for the Voice, few can handle the demands of their lifestyle; renowned figures such as Ulfric Stormcloak have either failed to develop their skills or failed to live by the Way.

Contrary to popular misconceptions, the Greybeards are not, strictly speaking, pacifists; the Way of the Voice teaches only that violence is the least of the Voice's uses, and it should be used for that purpose only in times of "True Need". The coming of a Dragonborn is considered such a time, and so the violent use of the Voice by a Dragonborn can be "overlooked", though the other followers of the Way are expected to remain peaceful.

Additionally, Thu'um is extremely dangerous and powerful, so the Greybeards refrain from using it casually. In history, the entire towns and nearby cities had to evacuate before the arrival of the Greybeards to meet Tiber Septim. Since Thu'um is so powerful that a whisper can atomize a man, those who endured the full might of the voice of the Greybeards are considered Ysmir, Dragon of the North as a deity among the Nords. Only three people in history were crowned Ysmir, they are High King Wulfharth, Tiber Septim, The Last Dragonborn.

Name: Greybeards, Followers of The Way of the Voice

Gender: Varies between male and female, Males are supermajority

Classification: Order of The Way of the Voice, Thu'um/Tonal Magic Masters, Religious Organization

Attack Potency: Multi-Continent level (They use the full might of the Greybeards that shook the world with the power of their Voice)

Speed:  At least Massively Hypersonic+ Combat and Reaction Speed (With Thu'um , they are at least equal to Odahviing, who can cross Skyrim in seconds, and should also be much as fast as skilled Ansei who can react and swing their swords in microseconds. Comparable to powerful mages who can cast, and react to lightning-based spells. The Greybeards appear pacifistic, but make no mistake they are very powerful "warriors" that no one ever dared to invade High Hrothgar in thousands of years)

Durability: Multi-Continent level (They endure the Voices from their fellow practitioners, so it is reasonable for them to have durability against voices of others and their own)

Stamina: High, can pray and fast for very long days.

Range: Kilometers to Planetary with Thu'um

Standard Equipment: The Robes of the Greybeards, an assorted selection of amulets of the Nine Divines

Intelligence: Genius. Greybeards are the wisest people in Skyrim and Tamriel. They preserve, expand and master the knowledge on Thu'um and Tonal Magic for thousands of years. There is no one better on Nirn to know so much about Tonal Magic that can manipulate the songs of the existence, which they know almost every Thu'um technique in existence including the lost Dragonrend shout (except the words of power and the comprehension). They aid The Dovahkiin in the hero's quest of attaining mastery in the Thu'um, and can help the hero to focus at using the Thu'um.

Weaknesses: They are very pacifistic, not prone to violence.