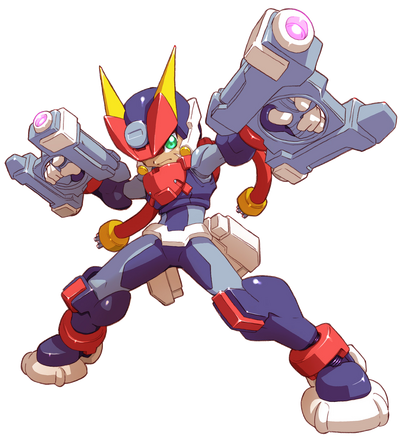 Grey awoke without a single memory in a secluded mountain laboratory. Before he could make sense of what was going on, he is confronted by Pandora, who calls him a "defective" before trying to eliminate him. Barely managing to escape with his life by salvaging a gun from a nearby fallen Hunter, he eventually falls from a bridge after a battle with a massive Mechaniloid. He is later found by another Hunter and nursed to health. When he asked why the Hunter would bother helping him, the Hunter replied with the words that would define the rest of Grey's life, "Do I need a reason to help people?" Inspired to help others, Grey attempts to go to Legion HQ to discover his identity, only to be attacked by Prometheus. He is only saved by MegaMerging with Model A. From then on he participates in the Game of Destiny, hoping to find out who he really is and the reason for his existence.

Ashe is a go-getter and daring Hunter who seeks to make her mark on history so that she'll never be forgotten. To this end she raids a Raider fleet to retrieve Biometal Model A, only to be confronted by Prometheus and barely survived the encounter. She nevertheless is up and at it by the next day, going after Model A once more. She is stopped by Prometheus and Pandora once more, only to MegaMerge with Model A. As a result, she too participates in the Game of Destiny to find out what Prometheus meant by "find out who you really are" and to put herself in the history books.

Powers and Abilities: Superhuman Physical Characteristics, Self-Sustenance (Types 1 and 2), Energy Projection, Can copy the DNA of defeated opponents to take their forms, Expert Marksman/Markswoman, Can charge their busters for additional power, Can accelerate for short bursts, Auto-Lock-On Systems, Additional powers via A-Trans: Elemental Manipulation, Absolute Zero Ice, Can slow down time, Shockwave Creation, Can duplicate themselves, Flight, Can restart and control scrapped machines, Can hack certain terminals, Can slide up and down long poles and vines with ease

Attack Potency: Solar System level via power-scaling (Defeated all of the other Biometal wielders in combat, As creations made by Ciel, who created a perfect copy of X's body at a young age, the Biometals' strength should be relatively comparable to the originals as the Biometals contain the souls of the Reploids they represent)

Speed: Massively FTL+ combat speed and travel speed via power-scaling (On par with the other Biometals)

Lifting Strength: At least Class G (On par with the other Biometal wielders)

Stamina: Very high, can fight a gauntlet of eight Pseudoroids right before facing off against the other Mega Men and Albert himself.

Intelligence: Grey is somewhat naive and inexperienced as to the way things work in the world due to his time in stasis. A bit socially awkward, Grey nevertheless takes to using Model A like a duck to water and masters the aspects of it and the forms he transforms into with A-Trans very quickly. | Ashe is an experienced Hunter and fighter. A go-getter, she's always the first to leap into the fray and has a great deal of knowledge about the hardships and harsh realities of the world after the end of the Neo Arcadia and the events of Mega Man ZX. She too quickly masters the nuances of Model A but is even more reckless than Grey at times due to her desire to leave her mark on the world so that she would not be forgotten.

Weaknesses: Has a limited supply of Weapon Energy to use special attacks with, Some forms are situational (i.e. Bifrost can't be used in small, enclosed spaces, Chronoforce is immobile outside of water), Grey is somewhat naive and inexperienced while Ashe is overly adventurous and reckless at times, The Giga Crush, Scatter Shot, and Homing Laser attacks require a brief pause to lock-on to targets and use a great deal of Weapon Energy.

Note: This profile covers Grey and Ashe as they appear in Mega Man ZX Advent. Due to the way character selection works, it is unknown which version of events is "canon", as the other character is nowhere to be seen during the events of the story.