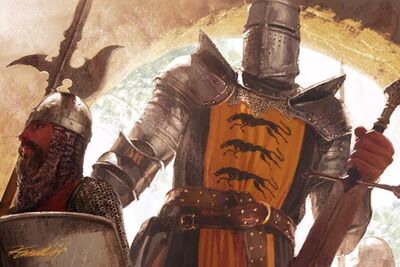 Ser Gregor Clegane is the head of House Clegane, minor vassals of Lannister, and the older brother of Sandor Clegane. Ser Gregor is a notoriously fearsome warrior with a tendency toward extreme violence. Due to his freakishly huge size, he is called "The Mountain That Rides" or more so often simply "The Mountain".

Attack Potency: Wall level (Crushed Oberyn's head) | Wall level (Should be around the same level as before, if not stronger, can easily rip heads off, a swing of his sword can cut through stone)

Speed: Athletic Human (Was stated to be quite fast despite his size) | Normal Human

Striking Strength: Wall Class (Decapitated a war horse in a single swing, crushed heads with no trouble) | Wall Class (Stronger than before)

Durability: Wall level (Was able to get up after being stabbed with a long spear. Capable of withstanding the force of his own attacks) | Wall level (Withstood a direct hit in the chest with a spiked club with no trouble whatsoever. Easily survived large pieces of Red Keep's destroyed walls falling on him)

Intelligence: Average. He is a simple minded killer, although has proven to be a capable, if excessively brutal, battlefield commander.

Weaknesses: Brutish and rushes forward into a fight without a second thought. Is a drug addict who needs to regularly consume "milk of the poppy" (a Westerosi opiate analogue) to stave off debilitating pain. He is not particularly agile, and was gravely wounded by a more nimble foe in Oberyn Martell. He relies more on strength and his well earned reputation for savagery than skill.