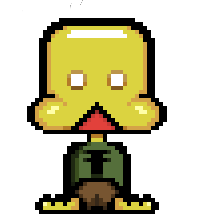 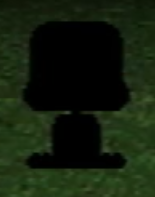 Guardian, also referred to as "The Player", "Pall", possibly "Newmaker", as well as other names, is the main protagonist of the fictional game, Petscop. Not much is known about him, if it is indeed a him, except that he is possibly the "Newmaker" (said by Tool, though this could possibly be referring to the player, or Paul) and some other hidden facts. He shares a lot of resemble to other characters including the violent Marven and the unknown Quitter.

Powers and Abilities: Peak Human, possibly Superhuman Physical Characteristics, Minor Light Manipulation (Seemingly emanates light), Transformation (Can transform into a "Shadow Monster Man", though this requires a specific location. In this form he can see and interact with things he couldn't normally), limited Dimensional Storage and Sealing (Could be how he carries the pets; when pets are "CAUGHT" they seem to be unable to interact with the world, the Green Man, or other pets unless the he uses them. Likely limited to the in-game pets), minor Telekinesis (Is shown possibly lifting two versions of Tool, as well as a large green key. Lifted a painting tool and a large silver key), Summoning (Can summon Tool)

Attack Potency: Athlete level to Street level (Can catch pets which like Toneth and Roneth, who are of similar size to large birds like emu or ostrichs; compared physically to Marvin on a multitude of occasions, who can harm and possibly kill humans easily), possibly Small Building level (Can capture/overpower Amber, who can cause effects comparable to a Magnitude 2 earthquake by jumping)

Lifting Strength: Unknown, possibly Athlete level, likely Peak Human (Can easily push water buckets his size, carries multiple pets: including a child, a ball described as "heavy", two bird creatures larger than it/him, etc. without being slowed. Calculated to be at least around this level, though this assumes he is actually physically carrying the pets and not using something like Dimensional Storage)

Stamina: Unknown, seemingly high (Never shown getting tired, even when walking around for extended periods of time carrying multiple pets)

Intelligence: At least Average, likely Above Average (The green man is often depicted using strategy and tactics to trick and capture pets. He can also solve complex puzzles and the like)

Weaknesses: Doesn't know how to open doors and has no combat experience

Note: Due to the vague nature of the series, not many of "Green Man"'s abilities or stats are completely explained.

01 guardian_history
Add a photo to this gallery