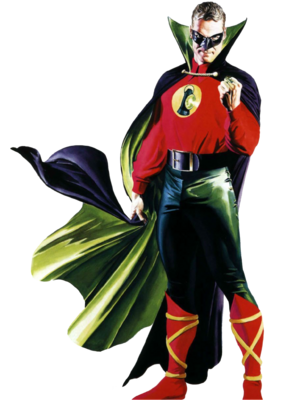 Alan Scott was just a normal railroad engineer until he discovered a lantern containing the Starheart, a powerful mystic artifact concealed by the Guardians. He then used his immense power to become the crime fighter, the Green Lantern. His power does not come from a Green Lantern Corps ring. He is a founding member of the Justice Society of America, and is the father of Jade and Obsidian.

Attack Potency: Solar System level (He was said to have enough energy to destroy the solar system while he was dying. Easily restrained Kyle Rayner. Repeatedly stated to be the most powerful human alive)

Speed: Massively FTL+ Combat, Reaction and Travel speed (Reacted in a nanosecond. At least comparable to other Green Lanterns)

Lifting Strength: Stellar (Should be comparable to the other Green Lanterns, whose constructs can restrain people comparable to Kryptonians in raw strength)

Standard Equipment: Starheart ring and lantern, though the power itself has long passed to him.

Intelligence: High. He has been an active crimefighter for decades, and a leader figure in the JSA. In his civilian identity, he is an engineer and the owner of a broadcasting company.

Weaknesses: Objects made from wood or plant matter ignore his powers, either phasing through or outright breaking his constructs, and even objects only partially comprised of them are resistant (such as Solomon Grundy). His existence depends on his willpower. The Starheart is evil, and has the potential to corrupt him.

Note: This is the Post-Crisis version of Alan Scott.