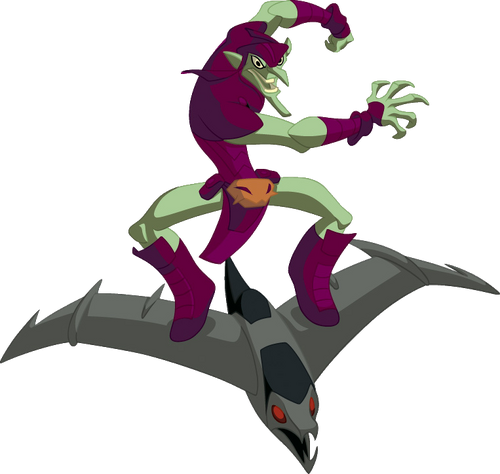 Norman Osborn, better known as the Green Goblin, is the main antagonist of the animated TV series The Spectacular Spider-Man.

He is a ruthless businessman, inventor, gifted chemist, the head of OsCorp Industries, and the father of Harry Osborn. After being exposed to a chemical formula, he turned to supervillainy as Green Goblin, terrorizing New York City to become one of Spider-Man's greatest archenemies along with Venom and Doctor Octopus.

Attack Potency: Building level (Comparable to Spider-Man, who has harmed him)

Speed: Supersonic moving speeds with Massively Hypersonic combat speed and reactions (Can easily react to Spider-Man's attacks and dodge his webs), higher with his Glider

Lifting Strength: At least Class 10 normally (Comparable to Spider-Man who can toss aside dump trucks)

Striking Strength: Building Class (Can harm the likes of Spider-Man)

Durability: Building level (Survived flying into several of his own Pumpkin Bombs)

Weaknesses: His mental instability can sometimes take the best of him, otherwise none notable.