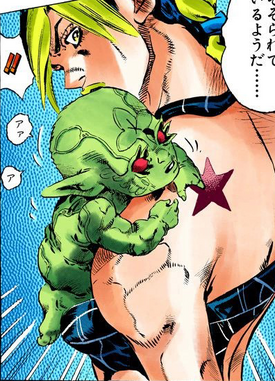 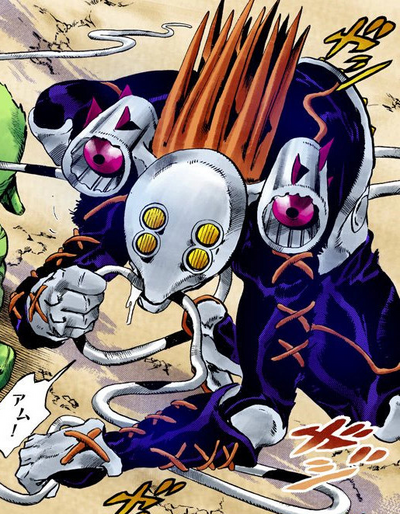 The Green Baby is the fusion of the bone DIO entrusted to Enrico Pucci and the souls of over 36 convicts deemed as sinners. Although infantile in personality, it nevertheless serves as a powerful foe to Jolyne Kujo until it fuses with Pucci, evolving his Stand further.

Classification: Fusion of DIO's bone and the souls of over 36 sinners, Stand User

Powers and Abilities: Extrasensory Perception (Capable of seeing ghosts and souls among some other supernatural forces that are normally otherwise invisible), Fusionism (Fused with Pucci's Stand), Aura, and Summoning (Of his Stand). Green, Green Grass of Home has Size Manipulation (can continuously half the size of anything it perceives as a threat as the distance between them decreases, can also increase or decrease its size to follow those effected by this ability), Existence Erasure (Eventually those shrunk will be erased from existence, the Stand can erase what it makes physical contact with), Extrasensory Perception (Much like its user), Invisibility (Stands can only be seen by other Stands and Stand Users), Non-Corporeal (Stands are the incorporeal manifestations of one's vital energy, and can only be harmed by other Stands), Non-Physical Interaction (Stands can interact with ghosts and other Stands)

Speed: Below Average Human (Can only crawl at the speeds of a newborn)

Lifting Strength: At least Peak Human (Was able to drag Pucci into the bushes to fuse with him)

Range: A few meters with Green, Green Grass of Home (Its ability begins to take place when an unknown force begins to get near the Green Baby)

Intelligence: Green Baby possesses an infantile mindset, being seemingly innocent and curious in objects. It will become highly aware once the fourteen words to Heaven are said are consecutive order.

Weaknesses: Green Baby possesses an infantile mindset and thus only has a limited cognitive capacity. It is interested in the Joestar birthmark and will cease its actions if it encounters it. If the baby becomes curious of something near it, any effect caused by Green, Green Grass of Home will wear off.