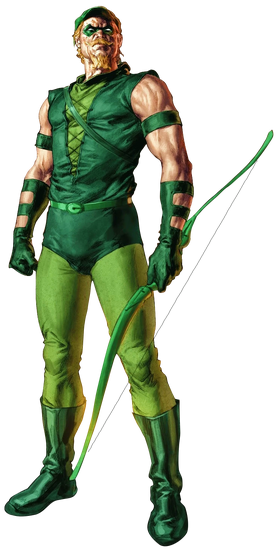 Green Arrow is a fictional superhero who appears in comic books published by DC Comics . His real name is Oliver Jonas Queen, a wealthy businessman and owner of Queen Industries who is also a well-known celebrity in Star City. Sometimes shown dressed like the character Robin Hood, Green Arrow is an archer who uses his skills to fight crime in his home cities of Star City and Seattle, as well as alongside his fellow superheroes as a member of the Justice League.

Tier: 9-A, higher with his strongest arrows

Age: Probably in his 40s

Speed: Massively Hypersonic (Should not be overwhelmingly slower than Katana)

Stamina: High, can fight even while heavily injured

Standard Equipment: A bow, but his arrows range from explosives, gas canisters, etc.