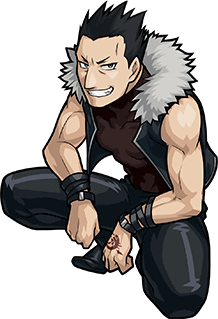 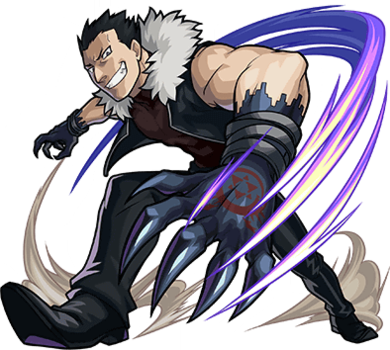 Greed (グリード, Gurīdo) is a Homunculus, called the "Ultimate Shield" because he can rearrange the carbon in his body to make his skin as hard as diamond, thus making him impenetrable by most weapons. As his name implies, he is a very avaricious character, who likes living in luxury, surrounded by powerful minions and beautiful women. He also has a habit of flipping people off in the manga. Despite his generally greedy nature, he is shown to care for his subordinates.

Powers and Abilities: Superhuman Physical Characteristics, Body Control, Organic Manipulation, Can make his skin as hard as diamond, Regeneration (Low-High; reliant on the philosopher stone which is an exotic matter that can take the form of a solid or liquid. The philosopher stone has shown to not be destroyed by from comparable or higher attack potency to the user unless it runs out of souls used from regeneration. Regeneration will not happen if the amount of soul from the philosopher stone is low, also), Immortality (Types 1, 3 and 8), Self-Sustenance (Type 2), Resistance to all poisons, toxins, venoms, viruses, bacteria, allergen, diseases, etc.

Speed: Supersonic+ (Kept up with Edward)

Weaknesses: Greed is very overconfident and if killed enough times, Greed will run out of souls to regenerate, causing Greed to turn to dust killing him for good.

Note: To see his statistics when he was in Ling's body, see Ling Yao's profile