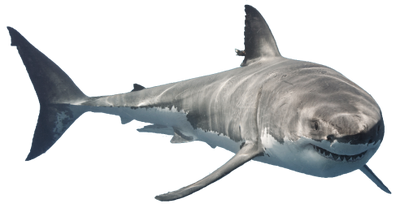 The Great White Shark is a species of large lamniform shark which can be found in the coastal surface waters of all the major oceans. The great white shark is notable for its size, with mature female individuals growing up to 6.1 m (20 ft) in length and 1,950 kg (4,300 lb) in weight. However most are smaller, males measuring 3.35 to 3.96 m (11 ft 0 in to 13 ft 0 in) and females 4.57 to 4.88 m (15 ft 0 in to 16 ft 0 in) on average. According to a 2014 study the lifespan of great white sharks is estimated to be as long as 70 years or more, well above older estimates, making it one of the longest lived cartilaginous fish currently known. According to the same study, male great white sharks take 26 years to reach sexual maturity, while the females take 33 years to be ready to produce offspring. Great white sharks can accelerate to over 56 km/h (35 mph) for short bursts.

Powers and Abilities: Superhuman Physical Characteristics, Natural Weaponry (Teeth), Large Size (Type 0), Enhanced Senses (The shark is capable of smelling even a small amount of blood up to 5 kilometers away), Extrasensory Perception (They can also sense bioelectrical fields generated by other aquatic organisms and vibrations within the water, and see well in darkness), Stealth Mastery via ambush, Underwater Breathing (Type 1)

Attack Potency: Wall level (Can create force equal to half of their own weight. Can break a metal cage), higher via piercing damage (Can rip off limbs with ease and has a measured bite force of 669 psi)

Lifting Strength: Class 1 (Can lift a half of their own weight)

Stamina: High (Large individuals can fight for over 2 hours against a fishing rod, and capable of diving all the way down to 1200 meters), but suffer from lactic acid