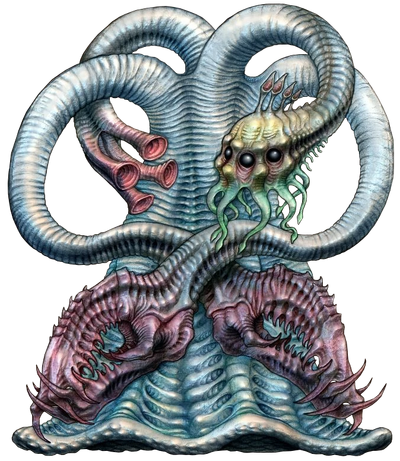 The Great Race of Yith are a race of sentient beings of extraterrestrial origin. They are capable of projecting their consciousnesses across time, inhabiting the bodies of individuals of other species and swapping their minds with their own. At some point in the distant past, they abandoned their original bodies for those of a species living on the primitive Earth and built a flourishing civilization on the planet in their new bodies.

They were eventually wiped out by a race of extraterrestrial beings known as the Flying Polyps, but they survived by projecting their minds en masse into an insectoid race that will one day inherit the Earth after mankind.

Powers and Abilities: Superhuman Physical Characteristics, Mind Manipulation, Memory Manipulation, Limited Time Travel (Can send their minds to any point in space and time), Time Manipulation, Advanced technology, Electricity Manipulation, Immortality (Type 6, Possess other lifeforms by sending their minds into their bodies, sometimes to escape death), Possession, Extreme Resistance to Pain Manipulation (They can't feel or comprehend pain at all)

Speed: Massively FTL+ (Comparable to the Flying Polyp), Immeasurable with their Consciousness Projection (Can send their mind to any point in space and time, taking the body of any being they please)

Intelligence:  At least Supergenius (Possess virtually all knowledge that exists throughout the space-time of their universe and are repeatedly referred to as all-knowing. Far superior to the Elder Things)

Weaknesses: Need to transfer their minds before death to possess another being.

Start a Discussion Discussions about Great Race of Yith