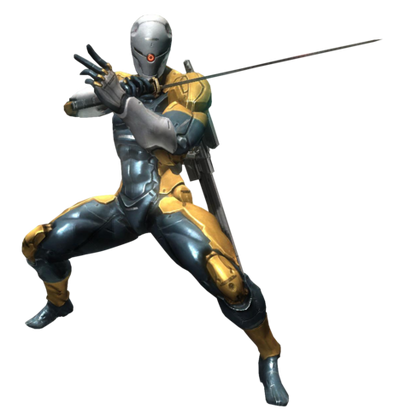 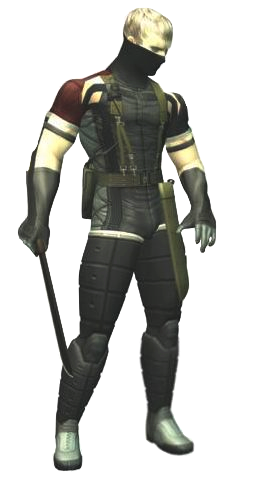 Gray Fox, real name Frank Jaeger, was a mercenary and former agent of U.S. Special Forces Unit FOXHOUND. Originally a child soldier, Jaeger was the only operative in FOXHOUND to achieve the codename "Fox," the unit's highest commendation and was decorated five times.

Powers and Abilities: Superhuman Physical Characteristics, Master of Stealth, Infiltration and Espionage, Enhanced Mobility, Expert Pilot, Master Martial Artist, Expert Swordsman and Marksman, Limited Precognition (Able to read opponents' body movements) | All previous, Cyborgization, Invisibility, Forcefield Creation, Durability Negation through Quantum Manipulation and Vibration Manipulation with High-Frequency blade (High-Frequency weapons vibrate extremely fast, allowing them to disrupt atoms with ease by shrinking their electron clouds. HF weapons can also cause changes to their edges particles at a quantum level, as well as cause quantum decoherence in the plank scale), Energy Projection with Arm Cannon, Shockwave Generation (Can generate shockwaves with his stomps), Limited Electricity Manipulation (His suit gives off an electrical discharge when damaged), Radar Negation (Jams radar in his presence), Resistance to Empathic Manipulation (Sam stated that nanomachines grant resistance to fear and battlefield emotions, whilst still feeling them deep inside their mind, cyborgs are unaffected by them physically and are still fully capable of fighting)

Intelligence: As the "Perfect Soldier," Gray Fox was educated in combat from a very early age, proving to be a talented killer and combatant. He was the only member of FOXHOUND to ever reach the rank of "Fox."

Weaknesses: In his cyborg body, Gray Fox has periodic violent spasms. Due to his body being composed of electronic devices, he is vulnerable to disruptive devices that target them, such as chaff grenades.