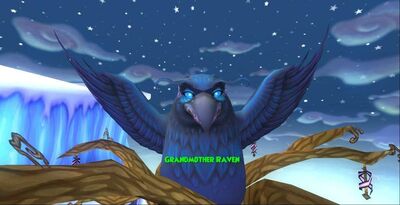 Lady Nightstar, more commonly known as Grandmother Raven is one of the three primordial beings in the Wizard101 universe. Existing in the First World, Raven was once in a romantic relationship with Grandfather Spider. However, she would realize that his heart was of Chaos and Darkness, and the two would engage in a battle in which Raven would come out as the victor.

After seeing that the First World was broken into fragments due to the Three Titans, Bartleby, Raven's brother, would sing the Song of Creation, which Raven would be empowered with Spider's Heart. This would bring the Spiral into existence. Further down the story, Raven would be weakened by an unknown source, and would later be saved by The Player.  However, she had lost his faith in them and began planning on letting the Spiral and everyone living in it die out so that the only thing remaining would be her, and her daughter Mellori.

Powers and Abilities: Superhuman Physical Characteristics, Self-Sustenance (Type 1), Higher-Dimensional Existence (Exists on a plane far beyond mortal comprehension, and views time as an illusion, existing beyond the past and future, and the linear passage of time. Views existence as something as trivial as a wheel, which she also is unbound by), Magic, Enhanced Senses (Can sense magic and magical auras. Stated that she could discern the purity of the Player's heart and truth of their intent before they started using Shadow Magic, Information Analysis, Immortality (Types 1, 3, 8 and 9; will continue to exist as long as the concepts of Light and Order do. Her true divine form exists independently from her mortal form), Death Manipulation, Life Manipulation, Necromancy, Chaos Manipulation, Fear Manipulation (Death Magic allows users to pull their own fears out of themselves and unleash it towards their enemy), Willpower Manipulation (With Death Magic, users can strengthen their own will), Life Force Absorption, Creation, Regeneration Negation (Mid-Godly; Grandmother Raven can kill the Divine Paradox despite its ability to regenerate after its body and soul are destroyed), Morality Manipulation (Life Magic can turn peaceful things savage), Attack Reflection (Scaling from Grandfather Spider), Summoning, Probability Manipulation, Non-Corporeal (Grandmother Raven is made of pure magic), Non-Physical Interaction (Can harm intangible, Non-Corporal and Non-Existent beings), Power Nullification, Sealing (Sealed Grandfather Spider away and locked his Chaos Heart in 6 Paradox Chains, each containing an infinite amount of power from all Schools of Magic save for Balance magic. Bound herself and Grandfather Spider in the Primordial Forest to watch over the Spiral), BFR (Can entrap foes into an "eternity of nothingness" and "A Place That Is Not A Place"), Transmutation (Balance Magic uses transmutation to channel the forces of the other schools together), Energy Manipulation, Matter Manipulation, Petrification, Law Manipulation (Brought Law and Order to the Spiral. Her mere existence can reshape any laws if needed), Conceptual Manipulation (Type 2; Her Light and Order forms the Spiral/universe and reality itself. Any changes to Laws and Light will affect everything across reality, and Raven was confident that Light and Order would remain after she destroyed everything in existence), Acausality (Type 4; Raven views time as an illusion,and exists beyond the past and the future, as well as the wheel of existence. WoG stated the Player (And by extension, the gods) don't follow cosmic rules and are outside the regular order of things), Telekinesis, Poison Manipulation, Pain Manipulation (Can create words which hurt to speak, hear and even read), Teleportation, Telepathy, Empathic Manipulation (Can calm targets, making them less aggressive towards them, or enrage them, making them more aggressive towards them), Corruption, Dream Manipulation (Scaling from Spider), Weather Manipulation, Technology Manipulation, Pocket Reality Manipulation (Can move to and interact with the Astral Plane, and likely created it as well), Ice Manipulation, Earth Manipulation, Fire Manipulation, Astral Projection, Statistics Amplification (Can buff attacking and healing spells), Mind Manipulation, Status Effect Inducement, Statistics Reduction (Can weaken healing, accuracy and damage output by 100% individually), Reality Warping (Created the world of Empyrea and spread a magical Aeythr storm across it, in order to lock away The Chaos Heart from Grandfather Spider. The Aeythr Storm is so powerful even quantum nanotech and going subatomic is unable to penetrate it.), Healing, Light Manipulation, Space-Time Manipulation, Shapeshifting, Duplication (Scaling from Bartleby), Electricity Manipulation, Water Manipulation, Shadow Manipulation, Abstract Existence (Type 1; The very embodiment of Light and Order throughout reality. Similar to how the Storm Titan had to destroy the concept of Chaos itself to destroy Grandfather Spider, one would need to destroy the concept of Light and Order to kill Raven. Her true divine "body" is made of pure magic and not matter), Probability Manipulation (Can reduce the chances of an enemy's attack working to 0% and the chances of her own to 100%), Omniscience (via The Eyes of Time), Can forcibly steal physical buffs with the spell "Dimension Shift", Resistance Negation to Magic

Attack Potency: At least Multiverse level+ (Defeated Grandfather Spider and sealed him away. Can unravel existence if she wanted to)

Speed: Immeasurable (Exists beyond and is unbound by the Wheel of Existence, which she created to show mortals that time is an illusion)

Durability: At least Multiverse level+ (Would continue to exist after the destruction of the Spiral, and WoG stated Raven wouldn't be bothered if existence was destroyed if she and Spider ever fought).

Intelligence: Supergenius; Grandmother Raven is stated to be the wisest character in the game and is therefore for smarter than the Player, even being stated to be beyond our comprehension. Her magic is so complex that Spark, even with his quantum nanotech could not breach it. Knows every single detail about the multiverse inside and out. It's stated she views time as an illusion and her true power and knowledge are beyond the wheel of existence. Created the Eyes of Time, which granted Bartleby an omniscient view of the past, present, and future. Omniscient with the Eyes of Time.

Note: For a summary of how magic works in Wizard101, click here.