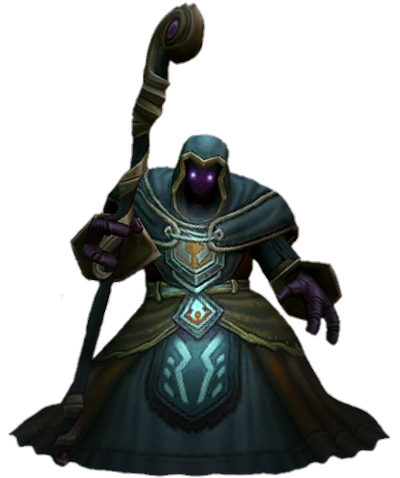 Grandfather Spider was the primary antagonist of the third arc in the MMORPG Wizard101. He was brought into the First World by The Creator as the embodiment of Shadow and Chaos, and to act as an opposite to Grandmother Raven, who is the embodiment of Light and Order. Spider would fall in love with Raven, and the two would play across land and sky. However, a battle between the Three Titans would cause this relationship to end. Raven felt that it was Spider's Darkness and Chaos that corrupted them, so she battled him, ripped his heart out and sealed him away in the deepest and darkest depths of the First World. The Song Of Creation was sung to weave a Spiral to hold the fragments of the First World together, and Spider's broken Chaos Heart would be used to charge its essence. The heart was then sealed in 6 Paradox Chains, in the center of Empryea. Millennia later, Grandfather Spider was freed from his imprisonment. He formed a plan to retrieve the Chronoshards and The Eye of History, to turn back time to the First World, in order to erase the Spiral, and everything in it from existence. This failed, and so he decided it would be better to reclaim his heart, which would cause the destruction of the Spiral, and from that, he will begin again, by creating a new Spiral in which he would act as God. However, the moment he was near his heart once again, he began to feel love towards Raven, and Raven felt the same way. The two decided to seal themselves in the Primordial Forest and to watch over the Spiral from there.

Age: Unknown (Only slightly younger than Bartleby and Grandmother Raven)

Classification: Embodiment of Shadow and Chaos

Powers and Abilities: All the same to a far greater extent, along with Conceptual Manipulation (Type 2; With his heart, he will regain control over the concept of Chaos. The Chaos Heart was used to charge the true essence of the universe, and without his Darkness and Chaos, the Spiral and reality itself will be destroyed), Regeneration Negation (Mid-Godly; Scales to Raven, who could have killed The Divine Paradox. Can also kill Raven and Bartleby), Resistance to Conceptual Manipulation, Law Manipulation, Light Manipulation (Exists to perfectly counterbalance Grandmother Raven, being able to stop her actions via his own will if needed. Fought her before the Spiral was created, with Raven being forced to seal him away as she had no other way to stop him, meaning he has resistance to her conceptual levels of Light and Order Manipulation), Reality Warping, Power Nullification, Matter Manipulation, Petrification, Probability Manipulation (Should scale to much weaker characters, who were unaffected by The Player reducing his chance of casting magic spells to 0%), Statistics Reduction and high resistance to Magic (Resistant to conceptual levels of magic)

Attack Potency: At least Universe level+, possibly higher (Far more powerful than Morganthe, who only holds a fraction of his power). Multiverse level+ with preparation time (With the help of 4 Chronoshards and the Eye of History, he was about to reset time for the entirety of the Spiral) | Multiverse level+ (The Chaos Heart on its own can unravel the very fabric of existence, which has an endless amount of timelines)

Speed: Unknown, possibly Immeasurable (Although he is far weaker without his Heart, he is still a god who exists beyond mortal perception) | Immeasurable (While mortals perceive time in a linear sense, Spider exists beyond the Wheel of Existence, which itself views linear time as an illusion and is unbound by it)

Intelligence: Supergenius (Comparable to Grandmother Raven and has outsmarted her in a few different scenarios. Has access to all Schools of Magic and knows the history of the multiverse inside and out. Far smarter than Medulla). Nigh-Omniscience with the Eye of History (Stole one of Bartleby's eye, which allows him to know everything that has happened in the past, as well as everything that is happening in the present, but not the future)

Key: Without his heart | With his heart

Note: For a summary of how magic works in Wizard101, click here