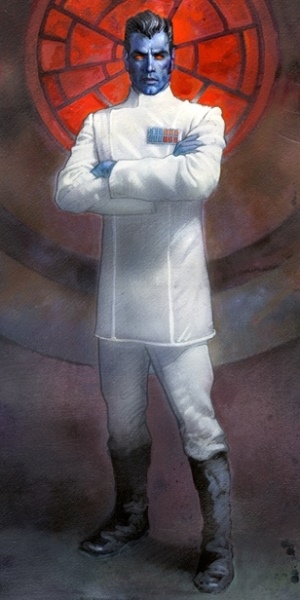 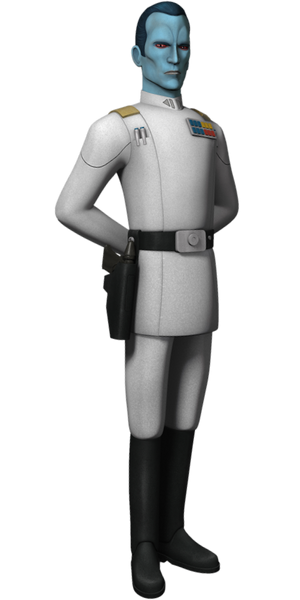 Age: Unknown (older than his 40's and most likely in his 50's by the time of Heir to the Empire) | Unknown

Powers and Abilities: Peak Human to Superhuman Physical Characteristics, Enhanced Senses (Has slightly enhanced hearing compared to humans. Also has enhanced eyesight and can see in the infrared spectrum, which allows him superb eyesight in low light and nighttime conditions compared to humans), Skilled hand-to-hand combatant, skilled marksman, Superhuman knowledge of entire races, collective fight-or-flight responses and tactics, manipulative psychology techniques, a master of unprecedented naval warfare, brilliant tactical and strategic mind, also is capable of reading an alien species mindset through their art and culture, etc...more or less base-line or peak-human abilities in everything else for a Chiss male

Durability: Street level | Small Building level (Intercepted a physical blow from an Imperial Sentry Droid without much trouble. Survived twelve blaster bolts to the chest and shoulders [albeit a large fraction of the energy was dispersed by his Chiss Defense Fleet body armour]. Anakin noted that his durability was beyond that of an ARC Trooper in full body armour)

Stamina: Peak Human | Superhuman. Able to continue fighting at seemingly near his peak for an entire day after taking twelve blaster wounds across his chest and shoulders and despite these wounds having been given only basic medical treatment. Anakin noted that Thrawn's durability and endurance were far beyond that of even an ARC Trooper.

Intelligence: Extraordinary Genius. Capable of outsmarting Captain Parack's seasoned Stormtroopers and officers, while stranded on a planet for over a basic year's time, if not longer, without any modern equipment or technology, could completely confuse and disorient even military geniuses such as Admiral Ackbar, Admiral Draysen, General Belis on a routine basis; was more than efficient in using a limited number of Star Destroyers, and other warships for maximum effectiveness against much more powerful and larger New Republic ships; nearly captured Luke Skywalker twice with his plans and ambush techniques and was almost always on the offensive, never losing except for one setback dealt to him by the main heroes of the New Republic and another during the final battle of Sluis Van when Grand Admiral Thrawn was assassinated by his bodyguard. Overall, absolutely terrifying as a military opponent; almost twenty years later even promising admirals in the New Republic such as Kre'fay were using Thrawn's personality and intelligence in simulated AI battles as an opponent for a benchmark of the highest competence as commanders of large scale tactical and strategic battles before the Yuuzhan Vong invasion. | Extraordinary Genius. A brilliant military leader, strategist, tactician, and schemer. Managed to crush a rebellion in an entire sector with limited forces and resources at his disposal. Can discern the psychology of individuals and even entire races from their artwork and history. Master manipulator who uses what personnel and resources he has at his disposal to carry out plans which seem like failures in the short term but reap benefits in the long term. Also, a skilled investigator who can quickly identify potential moles and other internal threats. Has cracked cases which baffled the likes of Wilhuff Tarkin and Wullf Yularen, themselves gifted officers whose intelligence and problem-solving capabilities are held in high regard by the likes of Darth Sidious and Darth Vader. Deciphered the strategic and tactical acumen of Balanhai Savit - a fellow Grand Admiral and master schemer himself - just from his musical talent and body language. Faced down and defeated a traitorous Imperial Navy task force which outnumbered his four-to-one without a single life lost on either side, even managing to turn half of the enemy's forces to his side via a brilliant ruse. Managed to get a grasp of the psychology and combat doctrine of the Grysk Hegemony's naval forces based on artwork created - not by the Grysk themselves - but by Grysk client species and slaves. Anticipated the behaviours and tactics of Grysk client species members based on their artwork and brief conversations with captured Grysk slaves. Has proven that he has a high level understanding of physics and astrophysics, using his knowledge in these fields to successfully seek out and destroy cloaked interdiction generators and cloaked warships of the Grysk hegemony, feats which impressed Darth Vader and even Admiral Ar'alani (herself a genius and one of the most brilliant officers of the Chiss Ascendency Defence Fleet). Thrawn is also a brilliant mentor. He helped bring out the innate talents of Eli Vanto and Karyn Faro, turning them from blindly loyal and unremarkable soldiers into brilliant officers in a relatively short span of time. He appears to have done the same with most of the crew members of his flagship and many members of the Seventh Fleet. Commander Kimmund of Darth Vader's First Legion stated that if Thrawn's leadership and mentorship styles were emulated and spread across the imperial military hierarchy, the Galactic Empire could become an unbeatable force that would survive forever.

Weakness: Nothing notable | Inept at politics and political manoeuvring, a weakness noted by the likes of Governor Arihnda Pryce, Colonel Wullf Yularen, and Grand Admiral Balanhai Savit; and a weakness which has been exploited by the likes of Grand Moff Wilhuff Tarkin, Director Orson Krennic, and Assistant Director Brierly Ronan.