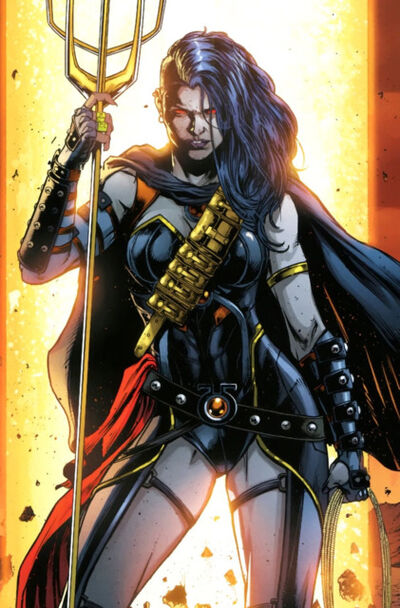 Grail was created by Geoff Johns for DC Comics' New 52 reboot. Her presence on Earth is given as the reason for Darkseid's invasion in the origin arc of the Justice League series, but she herself is never revealed to the reader. At some point, she was captured by A.R.G.U.S and held prisoner in a massive vault with Darkseid's omega symbol on the doors. Throughout all this, her appearance is never shown, but her confinement and subsequent escape is a prominent subplot of the Vibe series. She appears on-panel for the first time in Justice League #40, designed by Jason Fabok, though she first appears off panel via dialogue only in Forever Evil #7 and appears for the first time fully revealed in Divergence #1.

Speed: Massively FTL+ (Fast enough to grab and tackle God of War Wonder Woman before she could react. Later depicted as equal in speed to Rebirth Wonder Woman)

Range: Hundreds of Meters with her Omega Beams

Intelligence: Very high, enough to manipulate the Anti-Monitor, a cosmic being with countless millions of years of knowledge and experience.