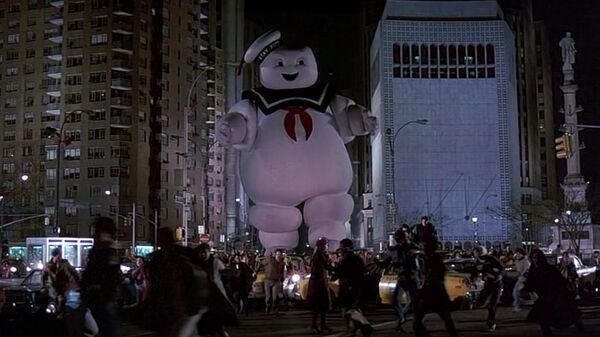 Gender: Varies depending on its chosen form, Genderless in its true form

Age: Unknown (originates from a dimension other than our own), first appeared on Earth around 6000 B.C.E.

Attack Potency: Unknown (Only made a brief appearance, never showcasing her full power, though her mere presence in Earth's plane of existence was enough to cause earthquakes, massive storms, and a spike in paranormal activity) | At least Small Building level to Building level (By virtue of size and destroyed a small building by stepping on it) | Varies (As stated by Idulnas, Gozer can take the form of quite literally anything, even an abstract equation), up to at least Universe level (While infiltrating Ray's mind, Gozer reveals to him that its true purpose is to simply destroy entire worlds and universes) | At least Universe level+ (Infinitely superior to its restricted avatars), likely far higher (The true upper limits of Gozer's power are unknown. In earlier scripts for the original Ghostbusters, it is mentioned that Gozer's true form is the "absolute ruler of the sixth dimension". It is unknown if this idea carried over to the final product, though in Ghostbusters: The Video Game, reading Egon's research notes reveals that when trying to study the portal Gozer came through and learn more about its reality, the extradimensional portal he opens leads to the sixth dimension.)

Speed: At least Relativistic+ (Easily dodged the shots from four Proton Packs at very close range. Proton Packs are portable particle accelerators that fire off supercharged particle beams) | At least Superhuman via sheer size | Varies (As stated by Idulnas, Gozer's destructor form need not even be a physical entity, but could be an abstract equation, as well) | Likely Immeasurable (Originates from a higher plane of reality than our own)

Durability: Unknown (Casually shrugged off four Proton Pack streams) | At least Small Building level to Building level (Unable to be destroyed directly by four Proton Pack streams crossing, and required the Ghostbusters to cross the streams in Gozer's temple in order to trigger a complete protonic reversal and cut off its connection to its own world, destroying its avatar in the process.), possibly Planet level (In Deviations, the Ghostbusters still refused to cross the streams as there was a chance the entire planet would be destroyed. Keep in mind, Stay Puft was not able to be directly destroyed by the streams crossing, but instead required its link to its own realm to be cut off) | Varies, up to at least Universe level | Unknown (Even Tiamat, Gozer's sibling, who is comparable to it in power, cannot permanently destroy Gozer. It is unknown if either Gozer or Tiamat's true forms can actually be destroyed conventionally, as they are treated as the embodiments of the concepts of destruction and chaos, respectively)

Range: Unknown, at the very least thousands of kilometers (Her presence alone caused earthquakes and storms all across the state of New York) | Several hundred meters via sheer size | Varies | Multi-Universal, as it can create avatars in many different planes of reality

Standard Equipment: Vinz Clortho and Zuul, a pair of terror dogs who prepare a world or universe for Gozer's arrival

Intelligence: Immense, as it has lived for countless eons and witnessed the rise and fall of untold civilizations across an unfathomable amount of worlds

Weaknesses: Gozer's true form seems to be unable to fully manifest in lesser realms. Certain avatars, such as the Stay Puft Marshmallow Man, will cause it to lose a massive amount of abilities. Bound by rules for its summoning, such as allowing the inhabitants of the realm it is about to destroy choose its destructor form, albeit unconsciously