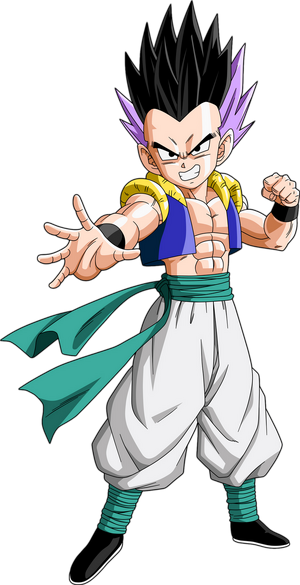 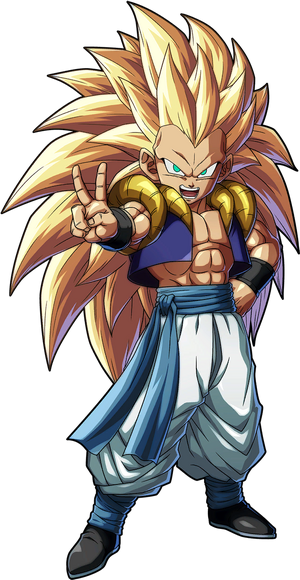 Gotenks is the Metamoran fusion of Goten and Trunks, formed to defeat Majin Buu.

Powers and Abilities: Skilled Martial Artist, Superhuman Physical Characteristics, Flight, Breath Attack, Ki Manipulation (Can be used defensively and offensively, to strengthen his skin or to fire ki blasts, which can home in on targets, and form defensive barriers), Acrobatics, Ki Sensing (Can locate others by reading their ki), Enhanced Senses (Saiyans have exceptional senses, allowing Gotenks to locate small, distant objects by tracking their smell, see clearly over long distances, and track the movements of others even in pitch black conditions by feeling vibrations in the air), Reactive Power Level (As a Saiyan, Gotenks grows stronger every time he fights and can become stronger in the midst of combat, vastly increasing in strength whenever he is mortally injured), Power Mimicry, Can create dimensional rifts via Vice Shout as a Super Saiyan 3, Transformation (Can transform into a Super Saiyan, increasing his capabilities drastically), Shockwaves Generation, Explosion Manipulation (Via Super Ghost Kamikaze Attack), Can bind his opponents by creating Super Donut Chain, Resistance to Cold and Radiations

Attack Potency: At least Large Star level (Much stronger than both Son Goten and Trunks), Solar System level as a Super Saiyan (Was stated and implied several different times to have power surpassing that of Innocent Buu, which was ultimately confirmed by the narrator. He is even stronger than Super Saiyan 3 Goku) | Solar System level (His base form alone was greatly implied to have surpassed his previous Super Saiyan form. Upon transforming into a Super Saiyan, he powered up even further and managed to do lots of damage to Buu with the Super Kamikaze Ghost Attack) | Solar System level (Fought on par with Super Buu, and probably even surpassed him. Was about to kill Super Buu before the time limit of his Fusion ran out)

Stamina: Very high. As a Saiyan, Gotenks can fight for long periods of time without tiring, keeping up an extended battle against Super Buu, but due to his nature as a Metamoran Fusion he can only fight for at most 30 minutes at a time, making his stamina somewhat irrelevant. However, his stamina suffers even more as a Super Saiyan 3.

Intelligence: While Gotenks has the combined knowledge of Goten and Trunks and is thus a competent martial artist, his immaturity makes for an arrogant and naive fighter who often toys around with his opponents for no reason other than dramatic effect.

Weaknesses: Gotenks is very cocky and likes to toy with his opponents for dramatic effect. Super Ghosts can be easily destroyed from a distance with Ki blasts. The fusion only lasts for 30 minutes and using Super Saiyan 3 reduces this time to 5 minutes. Goten and Trunks must wait a full hour before fusing again.

Ki: The fighting power and life force of a martial artist, a tangible energy derived from the user's vigor, courage, and mind. It can be used in a number of ways, such as to surpass the limits of one's body to greatly increase in strength, and it can be fired as blasts of energy or used to create defensive barriers. Along with his Saiyan blood and nature as a Memtoran fusion, Ki acts as the source of Gotenks' incredible power and abilities. Despite his young age, Gotenks is immensely powerful thanks to his fusee's power and nature as a Saiyan hybrid, and he has knowledge of all their techniques along with a number that he created himself.

Saiyan Physiology: The physiology of a Saiyan, an aggressive warrior race of conquerors. Saiyans have the natural ability to control ki and to fly. While his lifespan is comparable to that of a human, Gotenks will remain at his peak strength for much longer. One of the most powerful abilities of a Saiyan is their ability to grow stronger and stronger through combat, allowing Gotenks to constantly push his own limits during a fight and rise to higher and higher peaks in power. This ability grants a substantial boost in power when Gotenks is badly injured, allowing him to reach a whole new level of power once he recovers.