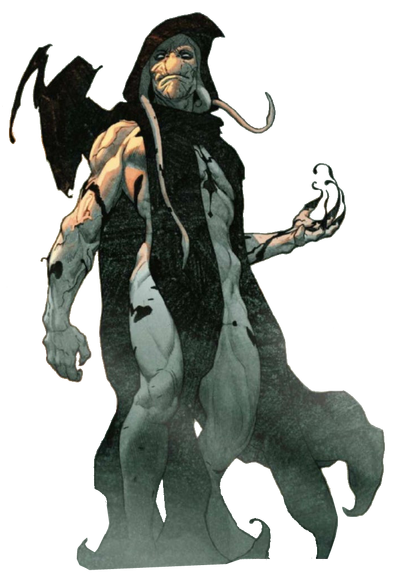 Gorr The God Butcher is the main antagonist of the 2013 comic series, Thor: God of Thunder. He was a character created by Esad Ribic and Jason Aaron. Stricken with grief over the death of his loved ones, Gorr gave up hope and believed there were no gods. However, after learning they actually existed, Gorr vowed vengeance, as no god ever answered his prayers. Gorr despised any variation of a god and sought to kill all of them. Allegedly, he killed has many war, chaos, genocide, revenge, plagues, earthquakes, blood, wrath, jealousy, death, degradation, fear and very few gods of poetry and flowers.

Age: At least Tens of thousands of years old

Powers and Abilities: Superhuman Physical Characteristics, Longevity, Immortality (Type 4, should he die his consciousness will be stored within All-Black to be resurrected at a later point in time, though this is not combat applicable]), Regeneration (Low-Mid), Enhanced Senses (Able to har the prayers of all those praying to Thor and other gods), Weapon Mastery, Martial Arts (Skilled in hand to hand combat), Water Walking, Self-Sustenance (Types 1 and 3), Flight, Spaceflight, Power Nullification (Able to nullify immortality), Energy Projection, Darkness Manipulation (Able to completely merge with shadows, as well as create and manipulate pure darkness to conceal himself), Weapon Creation (All-Black can be used to create numerous weapons including swords, scimitars, maces, knives, flails, whips, and hammers), Shapeshifting (All-Black is able to shapeshift to create clothes, armor, wings, weapons, chains, and tendrils), Life Manipulation (Able to create sentient minions such as Black Berserkers as well as artificial constructs of other people [Gorr in particular is able to create a vast army of Black Berserkers at will]), Clairvoyance (Able to see and feel through his Black Berserkers), Absorption (All-Black is able to absorb and assimilate things such as stars and black holes, as well as the blood of gods it or its constructs kills to strengthen itself and its host), Biological Manipulation (Those cut by All-Black will be gradually infected by it, destroying them from the inside), Time Travel, BFR (Can use shards of the Pool of Forevers to send his opponent thousands of years through time), Resistance to Heat Manipulation (Was unfazed by being tackled into the sun)

Range: Interstellar (Capable of attacking as well as commanding and absorbing Black Berserkers across interstellar distances), Multiversal+ with the Godbomb

Intelligence: Gifted (Gorr is highly proficient in combat, having garnered at least three thousand years worth of combat experience during which he bested countless gods, including numerous gods of combat and war. His skill goes so far as to be recognized by Thor, who just by observing the corpses of those he had killed was able to tell that Gorr was extremely well versed in the art of killing.)

Weaknesses: The Necrosword must feed on the blood of gods to amplify its power.

Start a Discussion Discussions about Gorr The God Butcher