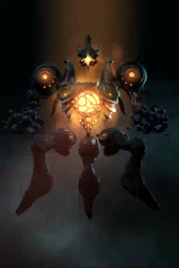 Attack Potency: At least Planet level (Immensely superior to Samus, whose Chozo Power Bombs are said to be capable of destroying planets. Would be able to pose a threat to the galaxy even in her weakened state, and continue its planet destroying rampage.) | Unknown (Effortlessly overpowered the Alimbic race, who possessed some of the most advanced and powerful weaponry in the history of the universe, making much of it superior to even the things Samus has had in her arsenal. The Alimbics feared that should Gorea consume all of them and leave the galaxy, it would soon destroy all life in the universe with absolutely nothing capable of stopping it).

Speed: Massively FTL+ (Although weakened, should still have the mind and reflexes to hand such speeds, blitzed all the hunters and managed to keep up with Samus) | Massively FTL+ (Wiped out almost all life in a galaxy during a one-sided "war" which lasted three months)

Striking Strength: Unknown (Almost killed every single hunter in the game with one blow)

Durability: Unknown. Due to Gorea's true nature and form, its physical body is immune to virtually all conventional damage and is extremely difficult to harm. Most weapons or attacks used against it are simply assimilated, making it even stronger. It was only able to be harmed and eventually destroyed by the ultimate weapon created by the Alimbics specifically to destroy the cosmic monstrosity. Because of this, the exact requirements for harming the entity via brute force are unknown.

Stamina: Limitless (Fought a three-month war against the Alimbics without ever stopping. Due to its seemingly inorganic nature, it likely never tires.)

Range: Likely Interstellar (Fought the Alimbics across every world they inhabited in the entire galaxy)

Standard Equipment: The Seal Sphere which tones down its power, but allows it to shoot tentacles, from the Seal Sphere it can shoot almost every single kind of weapon it can access.

Weaknesses: Gorea is not immune to the Omega Cannon (A weapon designed to kill it).