Dr. Gordon Freeman is the main protagonist of the Half-Life series. He is a theoretical physicist who is forced to defend himself and the Human race against hostile Aliens and other enemies following an experiment gone wrong. In the process, he becomes an almost legendary resistance hero, eventually becoming one of the leaders of an uprising against the alien invaders .

Tier: 9-B with the crowbar and small firearms, 9-B to 9-A with various weapons

Attack Potency: Wall level physically and with most firearms (Superior to Vorigaunts, Headcrabs, and the like), At least Small Building level with various explosives, the Gravity Gun, the Gluon Gun, and the Tau Cannon (Can harm the massive Gargantua over time with these; can shove around cars and the like and send smaller heavy objects flying with the Gravity Gun; has weapons that cause massive damage while also ignoring durability)

Speed: Superhuman with at least Subsonic+ reactions (Has repeatedly dodged rockets after they've been fired, could dodge rounds from Bradley Fighting Vehicles and M1 Abrams Tanks)

Striking Strength: Wall Class with the Gravity Gun and crowbar (Can kill a man in a single blow with the crowbar and stunt normal people with the less directly useful Gravity Gun); at least Small Building Class with greater weaponry (Can harm large armor-plated vehicles)

Durability: At least Small Building level+ with the HEV suit (Capable of surviving an airstrike; took the explosion of the Citadel´s ceiling who destroyed the roof; can survive lasers which do this much damage)

Stamina: High (Escaped from Black Mesa and it took him one day of running and fighting non-stop; survived even harsher circumstances during the rebellion against the Combine; HEV suit can provide morphine)

Range: Extended melee range with his crowbar. Several to tens of meters with weapons

Intelligence: Genius. A scientist who holds a Ph.D. in theoretical physics and a leader of the Resistance against the Combine. His thesis paper was named "Observation of Einstein-Podolsky-Rosen Entanglement on Supraquantum Structures by Induction Through Nonlinear Transuranic Crystal of Extremely Long Wavelength (ELW) Pulse from Mode-Locked Source Array". He is proficient with weapons ranging from pistols to more exotic equipment such as the Gravity gun, winning firefights against highly trained HECU Marines and later on transhuman Combine Soldiers. More impressively, Gordon went into Xen alone, venturing into uncharted territory while fending off all manners of hostile wildlife ranging from Bullsquids to a Gonarch and managed not only to free the Vortigaunts but defeat Nihilanth and cause the extinction of his race, which brought him to the attention of the G-Man who hired him on the basis of his extraordinary talent. Gordon is exceptionally analytical and calm even in the most dire situations, always finding a way out even if it seems like all is lost. Even when exiting from a 20-year long stasis into a world that was completely different from anything Gordon had ever expected, he was still able to keep his cool and work in an efficient and strategic way, consistently outmaneuvering and outsmarting the forces of the Combine, even puzzling Wallace Breen himself. A highly skilled puzzle solver who is more than capable of improvisation and using the environment to his advantage. At the age of 6, he constructed a butane-powered tennis ball cannon.

Weaknesses: The HEV suit has to be recharged from time to time upon being damaged, otherwise Gordon's durability decreases drastically 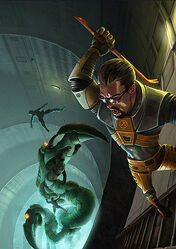 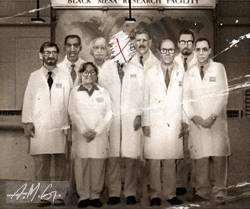 Gordon in a group photo with Eli Vance, Isaac Kleiner and Wallace Breen. 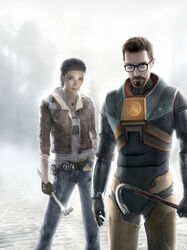 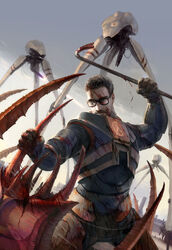 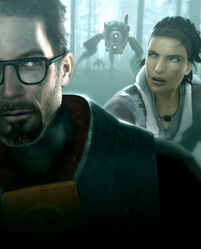 Gordon and Alyx being chased by Hunters. 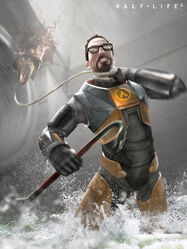 Gordon caught by a barnacle.
Add a photo to this gallery