Gordeau is a playable character in Under Night In-Birth. Gordeau once worked in the Amnesia together with Hilda, Chaos, Roger and the other members. Gordeau was an incredibly powerful fighter and was soon known on the streets as one of the most powerful EXS users. Later Gordeau left Amnesia to pursue revenge for Roger’s sake after he was brutally murdered by the Crimson Knight from Licht Kreis.

Name: Gordeau, The Greedy Harvester, The Ever Victorious Mercenary

Attack Potency: At least Town level (Enkidu noted that Gordeau is one of the two people he wants to fight, however, currently Gordeau subconsciously holds back his power due to the death of his friend Roger. This means that without the death of Roger, Gordeau should be around the power of Enkidu. Was so strong that even Carmine knew he had no chance against him)

Lifting Strength: Peak Human (Can hold up Waldstein with ease)

Stamina: Very high, shows no sign of tiring in combat.

Weaknesses: His fighting style is reckless and unfocused, He only takes his claws as a last resort or whenever he decides to fight seriously. 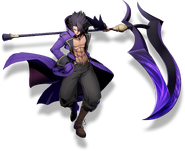