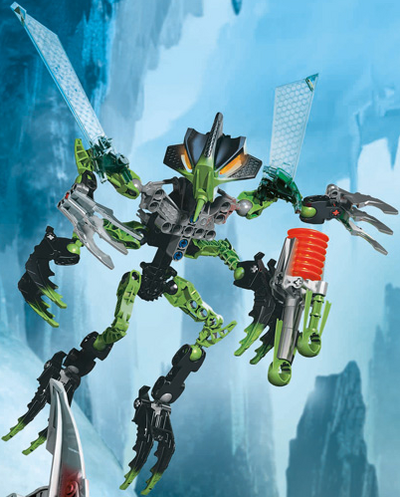 Gorast was created from Antidermis alongside the rest of her kind by Mata Nui as a member of the Brotherhood of Makuta, an organization dedicated to protecting the Matoran Universe and filling it with life in the form of the Rahi. Gorast is fanatically loyal to Teridax's rule, working towards his goals without question and slaughtering all those who oppose him.

Name: Gorast, the Makuta of the Tren Krom Peninsula

Powers and Abilities: Superhuman Physical Characteristics, Flight, Makuta Physiology, Darkness Manipulation (Possesses mastery over elemental Shadow), Density Manipulation (Possesses complete control of her own density, and can manipulate the density of others with a touch; can turn things intangible, and objects and beings that are rendered intangible for long enough will cease to exist), Electricity Manipulation, Energy Manipulation, Matter Manipulation (Capable of creating Rahi from Protodermis and breaking down objects on a molecular level through various means), Magnetism Manipulation, Mind Manipulation, Sound Manipulation (Can generate and control powerful sound waves that can shake objects apart), Virus Manipulation (Can engineer and control energy-based viruses that can infect mechanical or biomechanical beings, or create new Rahi), Absorption (Can absorb others and take on their traits, even in her Antidermis form), Corruption (Types 2 and 3; Makuta can infect Kanohi with Kraata, and seventh-stage Kraata can do this from a distance, and she can also drain the inner light of other beings using her stinger, tainting them with evil), Heat and Laser Vision, Inorganic Physiology (Type 1), Non-Corporeal (In her true form, Gorast is a mass of Antidermis, which is pure energy), Possession (Can possess unoccupied bodies), Self-Sustenance (Types 1, 2, and 3), Telepathy (Can telepathically communicate with people across the Matoran Universe and read the minds of the strongest Toa), Teleportation, Immortality (Type 6)

Attack Potency: Mountain level (Makuta have elemental power surpassing that of the Toa Nuva, such as Pohatu, who reduced Odina Fortress to dust, and they can fight against Toa while holding back. Gorast should be comparable to Spiriah, who is superior to Roodaka), can ignore conventional durability with many of her powers.

Lifting Strength: At least Class 1 (The average Toa is able to lift over 1 ton), likely at least Class 100 (Onua Nuva lifted a boulder, as have other Toa and beings on their level) or at least Class M (Roodaka once ripped Krahka, in the form of a Troller, a giant Rahi who can fit a city block in its mouth, from the ground with a single hand).

Durability: Mountain level. Her immortality makes her hard to kill, as she can abandon her bodies whenever necessary.

Stamina: Extremely high. Gorast's stamina should be comparable to that of Toa, and the Toa Manga fought against the Kanohi Dragon for an entire month.

Range: Extended melee range, Kilometers (Her minimum range should be comparable to a Toa's, such as Pohatu, who destroyed the massive Odina Fortress with a single timed Stone Blast) to Hundreds of Kilometers (Her Power Scream can be heard from anywhere on Mata Nui) to Planetary (Gorast can teleport across the Matoran Universe) with her abilities

Intelligence: Like all Makuta, Gorast is intelligent, possessing a deep, natural knowledge of the Matoran Universe and its workings.

Weaknesses: Due to her mutation, Gorast can no longer Shapeshift, and cannot use many of the Kraata Powers. She is also extremely arrogant and vulnerable to light. She can only use one of the Kraata powers at a time. In her Antidermis form, she can only access her mental powers, is weaker than normal, and needs a body to contain her essence so she doesn’t dissipate.

Makuta: Gorast is one of the Makuta, a powerful race of hundred beings created at the beginning of the Matoran Universe by Mata Nui. Although once a biomechanical being, Gorast has evolved past a physical body like the rest of her kind, taking on a form of pure Antidermis, though she requires a body to fully utilize her power and prevent her essence from drifting apart.

Kraata Powers: As with most Makuta, Gorast possesses all forty-two of the powers used by the forty-two variants of Kraata and, thus, Rahkshi. Some of these powers are already provided otherwise due to her nature as a Makuta, such as mind reading. She can only have one of these powers active at a time, but he can easily and rapidly switch between them. Due to her mutation, Gorast lost access to many of her Kraata powers.

Retrieved from "https://vsbattles.fandom.com/wiki/Gorast?oldid=6520560"
Community content is available under CC-BY-SA unless otherwise noted.