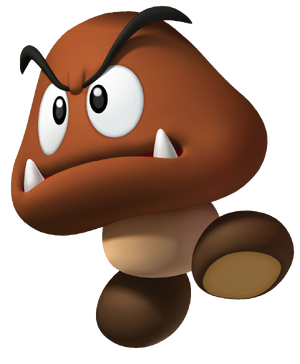 Goombas are one of the major species of the Mario series. Since their first game appearance in Super Mario Bros., they have become one of the most iconic members of the Koopa Troop. Goombas resemble small, brown mushrooms and are a fungus-based species like Toads, Amanitas, Spooks, and Shroobs. Goombas are physically weak and are not much of a threat to Mario or Luigi, since a single stomp usually defeats them, although a number of different Goomba variants have emerged throughout the years. The Goombas, as a collective race, used to be allied with the Mushroom Kingdom.

However, many of the Goombas have turned traitorous and joined the Koopa Troop, an organization led by Bowser. In many games, Goombas are the first enemy the player meets. Goombas have two feet and no visible arms. However, not all Goombas are allied with Bowser or the Koopa Troop. Some Goombas, such as the inhabitants of Goomba Village, live peacefully inside the borders of the Mushroom Kingdom, while others simply hold no allegiance and operate independently in distant locales such as Rogueport and Monstro Town. Goombas, along with Koopa Troopas, Piranha Plants, Lakitus, Bullet Bills, Bob-ombs, Shy Guys, and Boos have become some of the most well-known and iconic enemies in the entire Mario series, appearing in almost every title.

Attack Potency: Wall level (Most profiles mention that Goombas are among the lowliest and weakest among creatures. Despite this, one was able to casually destroy a rock much larger than itself for fun)

Speed: Likely Peak Human (Noted to be fast and can keep up during fast-paced battles in Minion Quest)

Lifting Strength: At least Peak Human (Can carry up to 29 other Goombas)

Weaknesses: Low intelligence and only becomes somewhat of a threat in groups.

Connie Maheswaran (Steven Universe (verse)) Connie’s Profile (Speed was Equalized, the Goomba had all of its optional equipment)