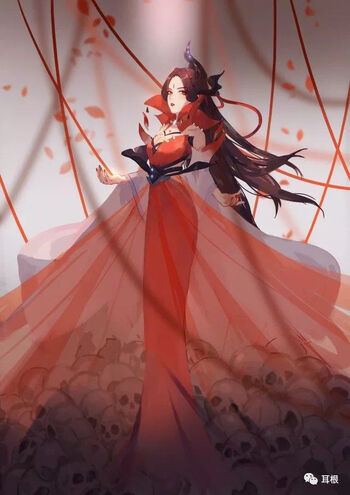 The soulclone created by the original Ghostmother's cut off left arm, she was given back her sentience by one of Bai Xiaochun's concocting accidents, after which she attempted to regain enough power to absorb her true self.

Powers and Abilities: Superhuman Physical Characteristics, Non-Corporeal, Regeneration (Low-Godly), Non-Physical Interaction, Extrasensory Perception (Can feel danger despite there being no giveaway. Can feel souls, death energy, life energy, qi and willpower), Flight, Invisibility and Stealth Mastery (impossible to see or feel even to Bai Xiaochun's extrasensory perception), Aura that causes uncontrollable fear, Death Manipulation, Necromancy, Ice Manipulation/Sealing that affects souls and bypasses Resistance, Absorption (Of souls, mind, bodies, energy, powers, death and life and someone's very existence. Can bypass resistances to an extent. She normally only absorbs blood and life energy at once as a soul bane unless the enemy is already a carcass), Invulnerability (As a celestial's clone, not even Demigod Bai could kill her or permanently hurt her), Possession, Avatar Creation, Adaptation (Can build up resistances to almost any material as long as ingested long enough), Longevity, Immortality (type 7), can ignore conventional durability in a number of ways. Resistance (To Poison Manipulation, Death Manipulation, Mind Manipulation, Body Puppetry, Possession, Power Nullification, Information Analysis, Sealing, Soul Manipulation, Transmutation, and Absorption) | All previous to a heightened extent, can bypass resistances that she previously couldn't | All previous to a heightened extent | All previous, Reality Warping through Will (Can change reality on a fundamental level, allowing her to control every living being in a world tens of thousands times the size of the Heavenspan Realm), Acausality (type 1), Limited Time Reversal with Preparation, Immortality (type 8)

Attack Potency: At least City level (Qi Condensation Bai Xiaochun was helpless against her) | Multi-Continent level (Nascent Soul Bai Xiaochun couldn't even harm her, and should be comparable to the corpse Blood Ancestor) | Large Star level (Comparable to Demigods like Bai) | At least Solar System level (Can keep up with an attack that reduced a "country" tens of times the size of  Heavenspan Realm to ashes for a small amount of time)

Standard Equipment: Teddy Bear (A skinless corpse used to combat enemies in her stead, aníthing short of pulverization will allow it to regenerate)

Intelligence: High, has the memories of several millennia-old cultivators who researched fighting most of her life.