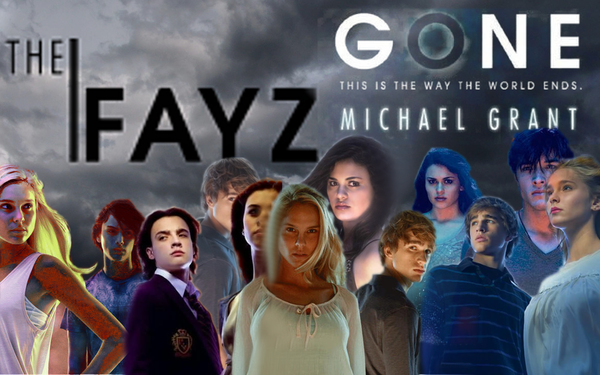 Gone is a book series written by Michael Grant. It begins when all the people 15 years old and over suddenly disappear from a small town named Perdido Beach and the surrounding area. Around this area a large opaque barrier that is painful to touch has appeared.Throughout the first few days the characters struggle with normal problems like getting a functioning society but as the series goes on more and more supernatural events occur.

Animals gain strange mutations such as a pack of coyotes that grow much larger and gain basic speech, or some of the kids gaining powers like the ability to fire lasers that can melt through concrete or a boy whose skin gains the texture of wet gravel after being mauled by coyotes. The children nickname the area inside of the barrier the FAYZ (Fallout Alley Youth Zone) which is a bit of a joke at the nuclear power plant in the area and events that happened before the story.

As the series progresses further it is revealed that a young, autistic boy nicknamed Little Pete is responsible for creating the FAYZ and that everyone is getting their powers from a creature known as the Gaiaphage. As the series reaches it's end more and more problems erupt such as shortages of food, deadly plagues and even deadlier giant man-eating bugs and most importantly the Gaiaphage taking over a newborns body and using it to try and kill everyone in the FAYZ. The biggest question on anyone's mind? Who will make it out?

The world of Gone isn't very powerful. The best fighters are mainly human levels of power with a couple reaching wall or even building level. Many of the main fighters have a power which has a varying degree of hax such as Regeneration, Healing and Illusion creation. However Gaia/the Gaiaphage and Little Pete hold quite a lot more power, with Gaia able to use all the powers of the currently living children with powers. Little Pete is much stronger in his first form, being able to to create a 20 mile diameter spherical barrier that tanked a nuke and suffered no damage. He also seems to have access to many more abilities such as Teleportation, Telekinesis and some degree of reality warping and creation

Retrieved from "https://vsbattles.fandom.com/wiki/Gone?oldid=6155327"
Community content is available under CC-BY-SA unless otherwise noted.