VS Battles Wiki
Register
Don't have an account?
Sign In
in: Characters, Hunter X Hunter, Hunters,
and 41 more 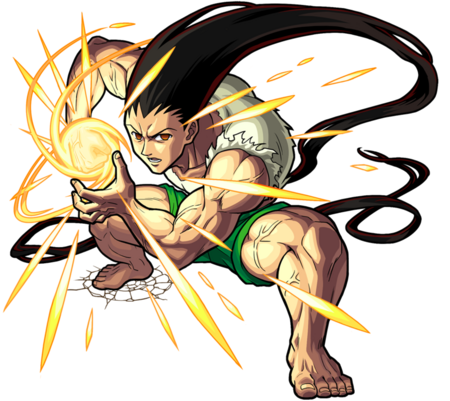 Gon Freecss (ゴン=フリークス, Gon Furīkusu) is a Hunter and the son of Ging Freecss. Finding his father is Gon's motivation to become a Hunter.

Superhuman Physical Characteristics, Enhanced Senses (Sight, Hearing, Taste, and Smell. Kurapika noted that his vision is far beyond normal human capabilities. His hearing is so keen that he can fight even in complete darkness. Immediately noticed that Tonpa's drink was laced. His sense of smell is considered as good as dogs; he can smell Leorio's cologne from several kilometers away), Accelerated Development (Gon's talent was described to possess an uncanny, bottomless potential. Gon can learn extremely quickly, and that is true especially in the field of Nen, with an aptitude like his being very rare), Reactive Power Level (Gon's physical capabilities increase amid combat. He can adapt to stronger and faster opponents and much more skilled opponents), Weapon Mastery (Gon is highly adept with using his fishing rod as a weapon), Adaptation (Was unaffected by the low temperature and oxygen levels on top of the world tree), Regeneration (Low. Healed a broken arm in ten days. Healed a broken radius and ulna, a cracked humerus, three rib fractures and twelve cracks in one month instead of the predicted four. Enhancers in general have much faster regeneration rates than others), Limited Animal Manipulation (Gon is shown to be good with animals. Tamed a Foxbear, which is noted for immense aggression. An entire forest of animals came to see Gon off before he traveled to become a Hunter. It's a common belief that good Hunters are well-liked by animals), Limited Stealth Mastery (Tailed Hisoka without being noticed for a day by unconsciously using Zetsu), Resistance to Poison Manipulation (Geretta's poison was stated to paralyze a person for ten days. Gon got up just a few minutes after), Immense Pain Tolerance

All previous abilities plus Limited Nen Manipulation (Enhancer; Has mastered the four basic principles and Gyo to limited extents), Afterimage Creation, Self-Perception Manipulation (By releasing his Ten and going into Zetsu, Gon can enhance his senses and dodge attacks that are too fast for him to react), Proficient Hand-to-Hand Combatant (Trained in Shingen-ryu Kung Fu by Wing)

All previous abilities on a higher level. Improved Martial Arts (Trained in Shingen-ryu Kung Fu by Bisky, Improved Nen Manipulation (Has mastered various advanced techniques and can use a limited version of En which allows him to react to opponents he cannot respond to with his sight. Gon's aura has been noted to be huge by various characters), Transmutation and Weapon Creation with Scissor (By transmuting his aura, Gon can create a sword made of Nen), Energy Projection with Paper (Gon can expel aura from his hands in the form of a spherical projectile), Statistics Amplification with Rock (By charging his fist with Ko, coupled with two limitations to create Jajaken, Gon can make his punches much more powerful), Awakened Power and Empowerment (Depending on Gon's emotional state, whether it is extreme determination (against Razor) or almost uncontrollable anger (against Pitou) his aura becomes more powerful and changes in nature. For instance, if he is furious, his aura becomes more powerful, dark, and sinister and was even able to put Morel, his disciples and Knov on edge. Killua stated that Gon in his enraged state was superior to a Pitou who was merely in Ten and this rage was enough for Pitou's intuition to discern he had potential to be a threat to the King), Shockwave Generation (He can create shock-waves with the mere charge-up of Jajanken and with trees)

All previous abilities on a far higher level. Air Manipulation (His mere power-up caused heavy winds to occur), Vow and Transformation (By forming a Vow, Gon sacrificed everything he had including his latent potential to force his body to adulthood; the Vow was so powerful that the only Exorcist in the Hunter Association could not remove it and would have died trying)

Attack Potency: Street level (Caught a giant fish that took over five people to catch) | Wall level (Can smash walls and make large holes in thick stone walls. Can casually one-shot opponents much larger than him) | Small Building level physically (Capable of this), Multi-City Block level+ with Fully Charged: Jajanken Rock (It was compared to an attack from Razor, One-shot Knuckle towards the beginning of their training, and while he was using Ko) | City Block level physically (Comparable to Killua Zoldyck), Multi-City Block level+ with Fully Charged: Jajanken Rock (Was going to one-shot Morel Mackernasey when bloodlusted) | At least Small Town level (In this state, he was stated by Neferpitou to be a threat to Pre-Rose Meruem, and also incapacitated Neferpitou in one blow. Though Gon's full capabilities in this form are unknown, this form is the strongest that Gon will ever be in his life, as this is his full potential)

Speed: Subsonic (Fast enough to disappear.) | Subsonic+ (Kept track of the coin for Gotoh's game, even when two Butlers joined in and created additional afterimages. Was able to create afterimages during his fight with Hisoka) | Hypersonic (Blitzed a man, calced at Mach 7) | At least Hypersonic+ (Should be comparable to Killua.) | At least Hypersonic+, likely far higher (Dodged attacks from and blitzed Neferpitou)

Lifting Strength: Peak Human (Caught a fish that took at least five people to catch. Casually broke a Nen user's wrist by grabbing it) | At least Class 5 (Capable of pushing a gate that weighed 4 tons, lifted and threw a heavy stone tile at Gido) to Class 10 (Beat Shizuku, a Phantom Troupe member, at arm-wrestling. When using Ren, Gon can defeat Nobunaga at arm-wrestling) | At least Class 25 | Class 100 (Comparable to Killua) | At least Class K (Physically stronger than Pitou)

Durability: Street level (Took a beating from Hanzo) | Wall level | Small Building level (Can survive a beating from Genthru) | City Block level (Unfazed by an attack from Baro, who can effortlessly fell trees with his attacks. Hollow's feathers dealt next to no damage) | Possibly Multi-City Block level+ (Comparable to Killua. Was able to block Razor's strongest throw. Capable of withstanding a brutal beating from Kite) | At least Small Town level

Stamina: Immensely High. Gon ran over 80 kilometers during the first stage of the Hunter Exam, including a section going up a stretch of stairs. He trained his accuracy with a fishing rod for hours on end until his hands were blistered, according to Geretta he did 7000 casts. He is also able to dodge Gido's spinning tops for over an hour while in a state of Zetsu. Fought Binolt for ten days straight. After training from Biscuit, Gon can run tens of kilometers multiple times without even being winded and trained to a state where he can use Ten 24/7. He can maintain Ken for three hours straight relatively easy, though this becomes harder in combat. He can move and fight even at peak exhaustion on willpower.

Intelligence: Gifted. Gon has often astounded allies and opponents alike with his astounding ability to think outside the box, finding a new perspective with which to look at a problem to solve it. He demonstrated this ability twice during the Third Phase of the Hunter Exam, blowing out Sedokan's candle instead of looking after his own, and choosing the long path to the goal only to break down the wall separating it from the short one, sidestepping Lippo's forced choice. Instead of fighting Nobunaga, he applied his knowledge of ostomy to find an alternative way of escaping. He was also the one who suggested Killua, and he auctions off items to raise a profit before attending the auction themselves as buyers, and later that they seek to be hired by Battera instead of purchasing Greed Island. He also has a good memory, which allowed him to win the quiz to obtain Ruler's Blessing. He is also fairly intuitive and, when fully focused, has occasionally shown the ability to think faster than the likes of Killua and Morel through cutting out everything that is not relevant. He is, however, notoriously inept at math. Gon's exceptional capacity for lateral thinking extends to battle tactics, making him wholly unpredictable. He managed to surprise Netero three times during their ball game. He devised simple but effective strategies to defeat Gido and Riehlvelt using his surroundings and resorted to a similar method to land a punch on Hisoka. He designed the plan that allowed Kurapika to abduct Chrollo. His willingness to take significant damage to land a critical hit would have allowed him to defeat Genthru without relying on Killua's plan had the latter not been saved by a fortuitous coincidence. Against Hollow and Bat, he displayed decent analytical skills, identifying the mechanics behind their coordinated attacks and turning them against the duo.

Weaknesses: His Jajanken takes some time to be charged, and can be interrupted. Gon is not very versatile compared to other Nen users; his lack of experience has been shown to cause problems within actual battles; certain Nen techniques can be particularly draining. Zetsu involves keeping one's aura exclusively in the body, it makes a Nen user more vulnerable to physical, and Nen attacks, because one doesn't have any aura on the outside of one's body to protect oneself. His transformation can only be made if he is in a state of intense emotional distress, and using it causes his body to decay.

Nen: Gon is an Enhancer and has an immense potential ranging from intellect and instincts to Nen capabilities. According to Wing, his talent is extremely rare. He quickly mastered all the fundamentals and various advanced techniques.

Jajanken: Gon's Hatsu, an ability in which he can manifest Nen attacks based on the game rock, paper, and scissors. He unconsciously added the condition of a chant to activate the ability, and the charge-up time increases the risk in combat, which increases its power.

Limitation Transformation: By sacrificing all his inborn talents and forcefully maturing himself through the use of Nen, Gon becomes very muscular, and all his statistics are dramatically increased, to the point where he could defeat one of the Chimera Ant King's Royal Guards, Neferpitou. However, the price to pay for this transformation is drastic, as it led to him falling into a coma after defeating Pitou, and were it not for Nanika, he would have died. His full potential and capabilities in this state weren't shown.

Note: Not to be confused with a similarly named character from Gon.

Dora (Dora and the Lost City of Gold) Dora's Profile (9-C versions were used, and speed was equalized)