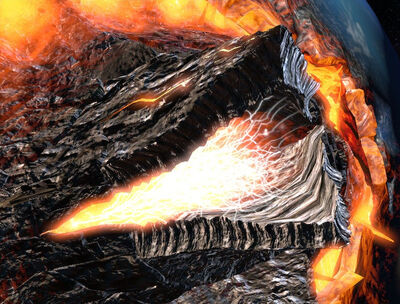 Gohma Vlitra (otherwise known as The Gohma) was the powerful dark spirit of Gaia, an entity which could easily destroy planets. It fought the Eight Guardian Generals and the Demigod Forces for countless years in a heated battle for Mantra. It is the response of the Demigods' abuse of Mantra.

Age: As old as the planet

Classification: The Will of Gaea, Gohma

Attack Potency: Multi-Continent level (Was capable of bursting out of the Earth with this much strength) | Large Star level (Came back a lot more powerful than 12,500 years ago, is more powerful than all the demigods except Mantra Asura and Yasha) | At least Large Star level, possibly higher (Is able to match Mantra Asura and Yasha, who beforehand had just defeated Sakra Devanam Indra Deus)

Range: Planetary (At least a couple of planetary diameters) when using mantra blasts