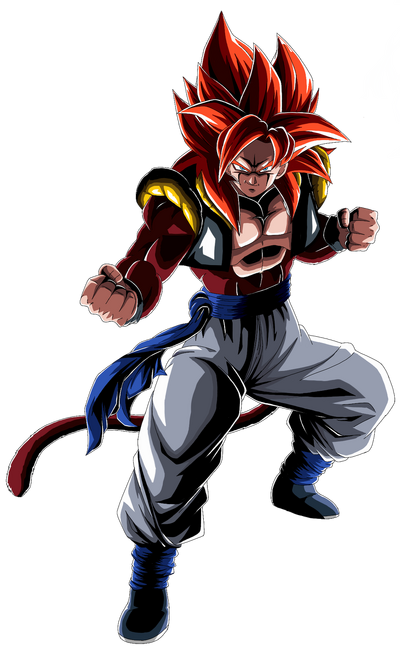 Gogeta is the Metamoran Fusion of Son Goku and Vegeta, originally formed to defeat Janemba, and later reappearing in Dragon Ball GT to face off against Omega Shenron. While all fusions have immense power, Gogeta's power is abnormal even by regular standards, as Vegeta and Goku's intense rivalry has brought out an exceptional power.

Master Martial Artist, Superhuman Physical Characteristics, Acrobatics, Ki Manipulation (Can be used defensively and offensively, to strengthen his skin or to fire ki blasts, which can home in on targets, and form defensive barriers, and form defensive barriers, and he can alter the weather by powering up), Energy Purification (Purified Janemba's evil energy, destroying him, and converted the Negative Karma Ball into positive energy as a Super Saiyan 4), Ki Sensing (Can locate others by reading their ki, detect malicious intent, difference in power levels, and beings in different dimensions), Enhanced Senses (Saiyans have exceptional senses, allowing Gogeta to locate small, distant objects by tracking their smell, see clearly over long distances, and track the movements of others even in pitch black conditions by feeling vibrations in the air), Flight, Spaceflight, Self-Sustenance (Types 1 and 2), Reactive Power Level (As a Saiyan, Gogeta grows stronger every time he fights and can become stronger in the midst of combat, vastly increasing in strength whenever he is mortally injured), Shockwaves Generation, Afterimage Creation, Duplication (Gogeta can create split himself into multiple clones by using the Multi-Form technique), Power Mimicry (Like Goku, Gogeta should be able to easily replicate other Ki-based techniques after seeing them once), Light Manipulation (Can create flashes of light to blind opponents and Super Saiyan forms can generate light in pitch-black condition), Likely Explosion Manipulation and Fire Manipulation, Pressure Point Strikes, Soul Manipulation (Purified and destroyed Janemba, including its evil souls), Healing, Self-Destruction, Telekinesis, Telepathy (Can telepathically communicate with others and read minds), Teleportation, BFR and Dimensional Travel, Can possibly create dimensional rifts and destroy space-time and pocket dimensions with his energy via powerscaling, Statistics Amplification (Should be capable of using Kaio-ken to greatly enhance his capabilities by potentially up to twenty times or more), Transformation (Can transform into a Super Saiyan, increasing his capabilities drastically), Non-Physical Interaction, Resistance to Cosmic Radiations, Heat Manipulation, Extreme Cold, Mind Manipulation, Paralysis, Poison and Sleep Manipulation (Should possess a will similar to Goku's, who previously showcased these resistances and Vegeta's, who was capable of overpowering Babidi's hold on his mind), Adapted to gravity, Immortality (Type 1)

Attack Potency: Multi-Galaxy level (Effortlessly destroyed Janemba as a Super Saiyan, and is superior to Goku who shook the Afterlife while transforming into Super Saiyan 3) | Universe level (Purified the Minus Energy Power Ball, which possessed enough condensed energy to destroy the entire universe, with a single kick. Completely effortlessly demolished and dominated Omega Shenron while holding back a considerable portion of his power)

Durability: Multi-Galaxy level (Tanked a punch to the face from Janemba and didn't even flinch) | Universe level (Easily withstood contact with the Minus Energy Power Ball and kicked it away without any harm to his body. Impervious to everything Omega Shenron threw at him even while suppressed)

Stamina: Very high. As a fusion of Vegeta and Goku, Gogeta should have comparable stamina. He never tired in either of his "fights", and his fusees have withstood extreme punishment and kept on fighting. However, given that his fusion can only last for thirty minutes at most, his stamina is irrelevant as he will eventually defuse.

Intelligence: With a combination of Vegeta's cunning and Goku's prodigal skill, Gogeta is an extremely intelligent individual when it comes to combat, with skill that is matched only by the greatest of opponents. He should possess Goku's mastery of ki and understanding of the Super Saiyan transformations and their costs and his ability to effortlessly replicate other ki-based techniques, along with Vegeta's cunning and skill at reading his opponents' movements. In his fight against Janemba, Gogeta wasted no time and went straight for the kill, and even in his fight with Omega Shenron, he toyed with him only to goad him into using the Minus Energy Power Ball so that he could destroy it.

Weaknesses: Gogeta needs to locate a ki signature to teleport using Instant Transmission. Metamoran Fusion can only last for up to thirty minutes at most, and the immense power of Super Saiyan 4 decreases this time to only a paltry ten minutes.

Ki: The fighting power and life force of a martial artist, a tangible energy derived from the user's vigor, courage, and mind. It can be used in several ways, such as to surpass the limits of one's body to greatly increase in strength, and it can be fired as blasts of energy or used to create defensive barriers. Along with his Saiyan blood and nature as a Metamoran fusion, Ki acts as the source of Gogeta's incredible power and abilities. Possessing an immensely high power due to his fusee's rivalry, Gogeta has access to a ridiculous amount of power and knows all his fusee's techniques, alongside a host of his own.

Saiyan Physiology: The physiology of a Saiyan, an aggressive warrior race of conquerors. Saiyans have the natural ability to control ki and to fly. Additionally, while his lifespan is comparable to that of a human, Gogeta will remain at his peak strength for much longer. One of the most powerful abilities of a Saiyan is their ability to grow stronger and stronger through combat, allowing Gogeta to constantly push his limits during a fight and rise to higher and higher peaks in power. This ability grants a substantial boost in power when Gogeta is badly injured, allowing him to reach a whole new level of power once he recovers.

Note: The statistics of Dragon Ball GT/Movie characters are part of a separate continuity, and as such tend to differ greatly from the current canon. The reason why Buu Saga Vegito is listed with lower statistics than Gogeta, despite statements that he is much stronger, is that we scale him from the manga continuity, and Gogeta from the anime, as that is the only medium in which the latter has appeared besides games.

Jiren (Dragon Ball) Jiren's Profile (Super Saiyan 4 Gogeta was used. Both were at 3-A and started 50 meters apart with speed equalized)